Facebook Instagram Youtube Twitter Patreon Shopping-bag
Menu
I'm feeling reasonably together this morning. Went to bed at 10-ish, and had pumped enough the night before that Kev didn't need to wake me up for the middle of the night feeding. (I did wake up on my own around 2 anyway, but I went back to sleep fast. Woke up for real around 4:40, a little before Kevin came to bed with Kavi. She was dozy, so I managed to pump some before she woke up and started demanding food. There was an ounce of milk left over from last night (hooray, we got an ounce ahead!), and I started to set aside the pump to feed her, but Kev woke up and took her to feed her so I could finish pumping. He must have been so tired; poor munchkin. He's such a good boy. 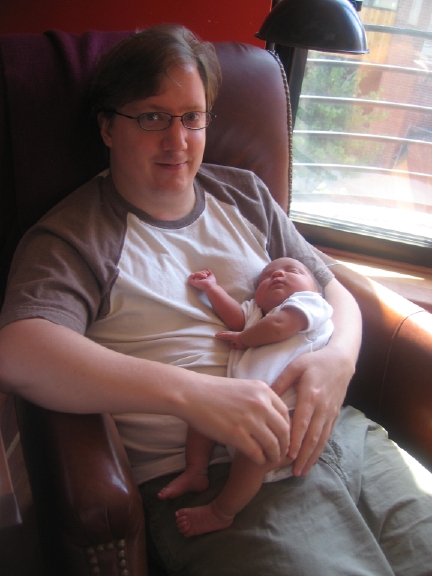 I have this funny split in my head -- on the one hand, I read other women's accounts of the first months with baby, and I'm tremendously grateful for all the work Kevin does; I feel so lucky. And on the other hand, there's a tiny voice in my head saying, "Why should I be grateful? It's his baby too -- of course he should do at least half the work. And did I mention that I'm still recovering from major surgery and months of pregnancy?? And my breasts are sore and swollen. And my back hurts!" Which doesn't make me upset with him at all, because, as I said, he's doing everything he can possibly do to help. But it does make me mad at the society that gives so many dads social sanction for *not* doing their share of parenting. So that women (myself included) end up feeling *grateful* for anything men actually do, instead of being able to take for granted that the men will do their fair share. (However you want to distribute that 'fair share' -- in my house, that means Kev does at least half the diapers, but I don't have a problem with one person doing all the diapers and the other doing all the dishes, if that's what works for you. I'm not objecting to division of labor; I'm objecting to all-baby-labor being automatically the woman's job, esp. if it's piled on top of whatever work she's already doing.)

After pumping, I took baby downstairs to give her some more milk, then put her in the moby sling and carried her around while I had a bowl of oatmeal and straightened up a bit. It's a gorgeous, perfect summer morning here -- the sort of weather where you want to throw on a t-shirt and shorts and just walk around outside. So I did! I grabbed some sandals and Ellie's leash and we went for a walk. Not a long walk -- just a leisurely stroll up and down the block, maybe twenty minutes. But it felt like an accomplishment somehow, to have time enough and be mellow enough and feel strong enough to take my baby and puppy and just go for a little walk. My standards for accomplishment have clearly dropped radically. :-)

Came back in, and it was time to pump again at 7-ish. Kavi was fretful, so after some juggling, I managed to get her cradled in one arm while I pumped the other side (and then vice versa). I felt like a very competent mommy. :-) And by the time I was finishing (and dozing off a bit), Ann had come downstairs, so I handed baby off to her and checked e-mail and had a mid-afternoon snack (some of the delicious grilled lamb/onion/pepper with dried-cherry rice that Kevin cooked last night). And now here we are, and it's 9, and I'm off to pump again. So far this morning, so good.