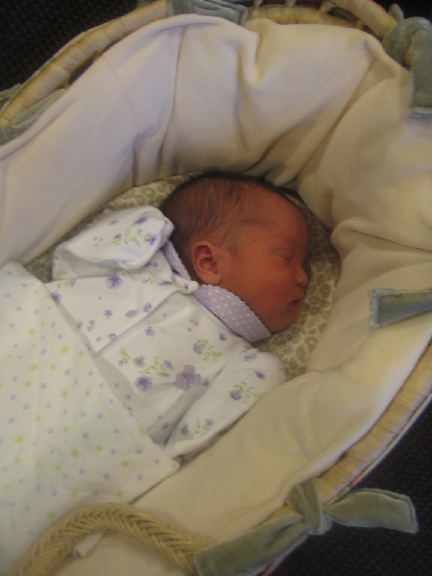 Kavi is eight days old! Today is actually her full-term date, when I hit forty weeks. She hasn't changed much in the last week though; according to the scale at the pediatrician's office, she's gained half an ounce so far. (This is very good; most babies lose 10% of their body weight in the first week. I guess all our efforts to push stuff through her so she wouldn't get jaundice were actually effective.) She's not so exciting at the moment; most of the time, she just looks like this (photo right). Yes, it's cute, especially when she's in one of the little outfits that my friends and family got for her. But it's not exactly eventful. All she does right now is eat, sleep, poop and pee, and occasionally scream. I'm told that the first smile is usually around six weeks; we're looking forward to that. It'll be nice to get a reward for the labor. I do like it when she makes eye contact with us -- one of these days, I'll have a camera nearby when her eyes are fully open, so you can see what it looks like.

Of course, if she's not doing much, neither am I. Y'all remember my to-do lists from the weeks just before baby came? This is my typical to-do list now:

That really is about it. If other stuff gets done, that's a bonus, but it is not expected. Thursday we managed the pediatrician and a run out to Target for items we didn't realize we'd need. (Second diaper genie for downstairs bathroom, some nursing clothes for me, a few boppy covers, a changing pad and wipes holder for the diaper bag, some microwave sterilizer bags for her bottles and pump parts, a few more receiving blankets (these are the really thin ones that we swaddle her in all the time and she spits up on)). We got scolded for taking her to Target by my mother, who says that you should never take a baby out in the first month -- they're just too fragile. I think pediatrician probably would agree; baby's immune system is not well-developed yet. We feel like bad parents, and are grateful that she doesn't seem to have gotten sick from it. We'll be good now, and restrain the urge to take her out to the park and show her off.

We'll also resist the urge to drive up to Madison -- I am *so* tempted to just swing by the Strange Horizons tea party with her. But I don't know that four hours in the car seat is so good for one-week-old-baby, especially given that she can't hold her head up yet -- she looks freakishly disturbing with her head tilted to a ninety-degree angle in the car seat. It frightens us every time we go over a big bump, feeling like her neck is just going to snap. And that's aside from the dangers of exposing her to a lot of strangers (and convention-going strangers, who are likely all sick by Sunday afternoon). And they probably won't let Ellie into the hotel. And Kevin's mom is arriving tomorrow anyway. All in all, it just makes far more sense to stay home. But I sad to be missing WisCon. Sigh. Maybe I should just stop reading Jed's journal for the next few days so I don't get too mopey.

Friday we were feeling pretty exhausted, so didn't leave the house at all. We did a few loads of laundry and straightened up the bedroom a bit, and that was about it. No cooking -- we're eating lots of pre-made curries from my mother, along with a bunch of fresh fruit -- that's something that it hadn't occurred to us that we'd want, but after four days of hospital food, I was craving fruit when I got home. Nilofer had left us some, thankfully, (plus tomoatoes and avocadoes) and we made the grocery van people bring us more. If you're going to visit a friend with a newborn, casseroles and curries are good (any one-dish meal that can be frozen until needed), but fruit is also a very useful thing to bring!

The curries I'm eating are interesting. My mother sent them -- a 'white' potato curry and a 'white' chicken curry. They're actually more yellow or light brown, but they're called white curries or milk curries because they have no chili powder or tomato in them. The saying apparently is 'milk to bring the milk,' and my mom says that in Sri Lanka, they would have this made fresh for them every day -- it was all nursing mothers ate for the first month. I get bored too easily with my food to do that, but I am trying to eat some of it with at least two meals a day, because it really is good for milk production -- not because it's milky, but because it's made with loads of fenugreek (aka methi seeds), which is probably the most recommended non-drug option for increasing breast milk production. So that wacky folk wisdom actually is based in something real and effective. Now, I'm not sure why you can't have chili powder in these -- I'm guessing that some babies find the spiciness transmitted through the breast milk irritating. But it just makes me too sad to eat curry without any spice, so I've been adding a little bit of normal curry whenever I have the white curry. Kavi doesn't seem to mind.

Other things that are supposedly good for milk production: caffeine, oatmeal, lots of fluids, as much sleep as possible, massaging your breasts while feeding/pumping, looking at your baby and/or hearing it cry, and being relaxed. The last one sounds goofy to me, but pediatrician Roshani assures me that it's true -- if you're tense and stressed, your body goes into fight or flight mode, not feed the baby mode. Hormones are weird. Where am I learning all this? A really excellent thread of comments on pumping and breastfeeding, which I recommend to all new mothers. It's not necessarily all authoritative -- I'm not sure there's any good reason for the caffeine or oatmeal recs. But it's all interesting and informative. I'm learning a lot.

I'm a bit cranky that I do have to learn so much about pumping. Kavi is still refusing the breast -- in fact, she's refusing it even more now than she was the first few days at the hospital. (The last day, when engorgement set in, she refused it completely -- that was when we were starting to get worried about jaundice, and so needed to pump / give formula.) I think the phrase 'nipple confusion' is confusing. It's not that Kavi's confused -- she clearly knows the difference between a real nipple and a fake one. It's that she *prefers* the fake one. I think it comes down to laziness; it's much easier for her to get milk out of the fake nipple, and she knows it, so when I offer her the real one, she takes a suck or two and then screams her head off. I suspect if we let her get hungry enough, she'd eat from it eventually, but I don't have the heart to let her scream for a couple of hours.

I'm just crossing my fingers and hoping that she does take the breast again eventually. It will save us so much time -- right now, feeding time is doubled, because there's stage one of pumping, then stage two of feeding. And perhaps more importantly, if she starts feeding 'direct from the source', it'll assuage my feelings of rejection. 'My breast isn't good enough for her,' is a stupid stupid thing to think -- I know that. But there's a horrible disappointment every time I try to put her to the breast and she hollers and pushes it away with her little flailing hands. I've put up with these annoyingly huge mammary glands for twenty-five years in the hopes that they would be good for something eventually. And now they're not working properly. Incredibly frustrating. We're coping, and baby is getting enough nutrition, so it's not actually important in the long run. I know. But still. It makes me feel like my baby doesn't like me. :-(

One final note: If you are breastfeeding, you need to get a boppy. Even if you're giving bottles (of formula or pumped milk) it's helpful, but if you're breastfeeding, it's essential. I don't know why maternity wards don't have them in every room, because part of what made breastfeeding so hard initially is that it was so difficult to find a comfortable position for both of us. They stuff pillows around you and under you and behind you, which is okay, but you can't do that yourself at first (because you're too sore to twist around that much), and likely they still don't get enough of them to keep your wrist from feeling like it's screaming in agony after fifteen minutes of trying to hold the baby's head in a well-supported position. It is *so* much easier with the boppy. All the little lists tell you to pack things like nightgowns and robes and toiletries and makeup for the hospital, but you can get by without those just fine. What you absolutely need to pack is your boppy. This has been a public service announcement.

P.S. -- I really want a 'Boho' boppy cover, but Target online seems to not be offering them anymore, and they didn't have any at my local Target. I couldn't find any anywhere else online. Very sad. If you're going to a Target and see one, and are willing to buy it and mail it to me, I'd happily pay you back for cost + shipping. Let me know!

8 thoughts on “Kavi is eight days…”