Facebook Instagram Youtube Twitter Patreon Shopping-bag
Menu
Oof -- yesterday just disappeared. Had some follow-up tests to do at the hospital after the blood pressure incident, which took longer than anticipated, as almost always. You'd think by now I'd have recalibrated 'drop something off' to equal spend an hour+ there, and get poked in the arm with a sharp stick to boot, but somehow, my brain resists knowing that's what they really mean. I did eventually escape, and headed up to Gethsemane.

My poor roses didn't make it through the winter; I have officially given up on them, and am replacing them all. Sadness. But I'm hopeful that we'll have a nice new set of roses to enjoy. I'm a bit mopey that Gethsemane isn't offering Granada this year, which I really loved last year -- I'm going to have to order it in the future if I know I want it. But I'm taking this opportunity to switch from almost all hybrid teas to trying a grandiflora and some floribundas, to see whether I prefer more flowering, smaller roses to the classic long-stemmed tea rose. I definitely still want some roses suitable for cutting and bringing indoors, but the labels claim that you can do that with these; we'll see how it goes.

I chose Daybreaker, Rio Samba, Intrigue, Strike it Rich, and Christopher Marlowe (because I couldn't resist his name). The latter is actually what's called an David Austin English rose, which I believe is an attempt to breed back to a type of Old English rose that has old-fashioned strong scent, modern hardiness and disesase resistance, as well as beautiful blossoms. Looking forward to what they do this summer!

Hmm...it just occurred to me that one advantage to doing this sort of change with the roses while I'm still working with containers on a roof is that it lets me try a variety of roses and learn which ones I love, which will be useful knowledge if we're ever in a house with actual ground to plant in; at that point, I can put in roses that I know I adore, and which will hopefully be permanent, and have a good sense of what they'll likely do. At this point, Granada is a sure inclusion, along with a Joseph's Coat climber (which I'll also be replacing from last year, as soon as they get some in; they're ordered). Various roses I've tried in the past that I've liked, but didn't blow me away include Just Joey and Voluptuous -- nothing wrong with them, but eh. Huh -- looking at my journal, it seems like I did have Rio Samba last year. Weird; I guess that was the one I didn't remember the name of, and never managed to tag. Well, I have no sense of how it did, so I guess I'll try it again and see what I think.

I also bought a bunch of little petunias and herbs and such to fill out my windowboxes and strawberry pots. Things are starting to really get going in the garden; the one window box that I planted a few weeks ago is looking rather lovely now. :-) This one is just off the living room, and I chose a palette of old-fashioned colors; lavender and pink and peach and faded orange. It feels very English country garden to me. The flowers include linaria, diascia, fuschia, pansies, dahlia, million bells, and nemesia, I think, in roughly that order, left to right. Not certain that's what the last one is... 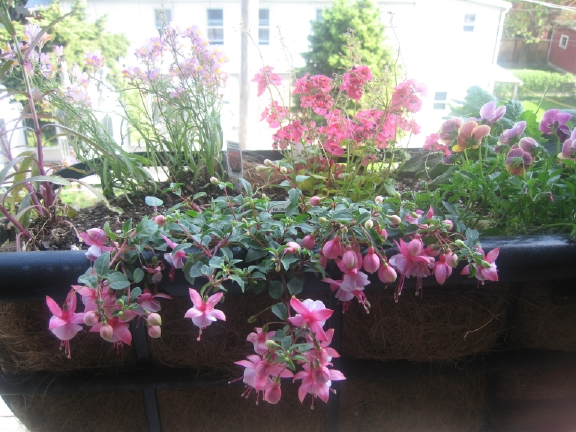 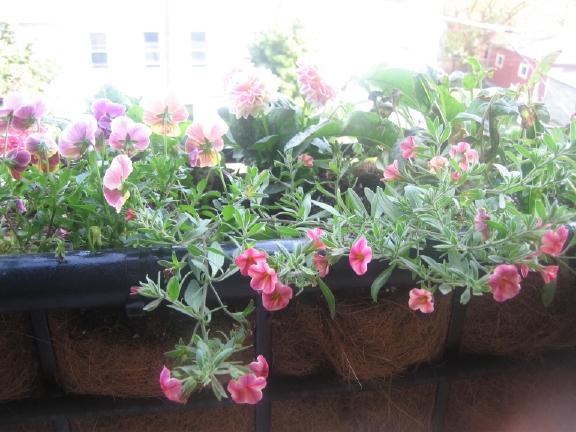 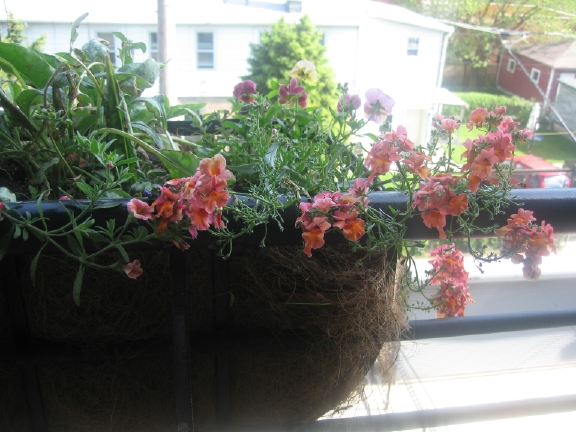 Along with the garden store, I stopped for coffee (for Kevin) and Ethiopian food (at Ethiopian Diamond, my favorite local place, though I admit the atakilt is better at Raj Dashen). Then came home to get ready for...hmm...I think I'll leave it a surprise, actually. I had an interesting afternoon yesterday -- more info on that soon.

It was a tiring afternoon too, and when I came home, I was too exhausted to do more than plant the windowboxes and watch some tv before bed. So today, finish grading, plant the roses, put up a shelf. Possibly hang out for a few hours with my friend Sapna, who's in town visiting from Paris, though that may happen tomorrow or the next day instead. Reasonable goals, yes?