Menu
Merry Christmas everyone! (Or the winter holiday of your choice. :-) It's Christmas around here, and has been for a while, in a delightfully extended sort of way. It started a few weeks ago, when Kev and I went to my sister's holiday party. Many doctors, much merriment.

We didn't stay super-late, because the next day was our own holiday party -- a tree-trimming tea party. Plenty of good friends, good conversation, and of course, good food. I didn't go quite as all out as I normally would -- I purchased the marzipan fruits, plum pudding, fruitcake and the lemon-poppyseed and cranberry-orange scones instead of making them from scratch. I'm trying to be just a little less type-A these days. :-) But we did make some of my family's traditional spicy veggie sandwiches (the three colorful layers are carrots, beets, and spinach, mixed with chili, cream cheese, butter, and a secret ingredient), along with a raspberry trifle, Kevin's homemade lemon curd, three more kinds of tea sandwiches (creamy mushroom, classic cucumber, roast lamb with mint-coriander chutney) and probably a few other things that I'm forgetting. 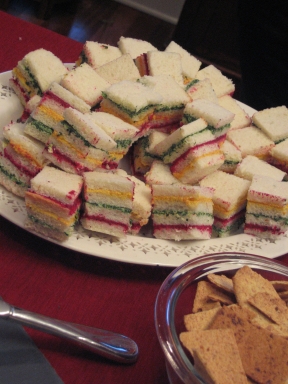 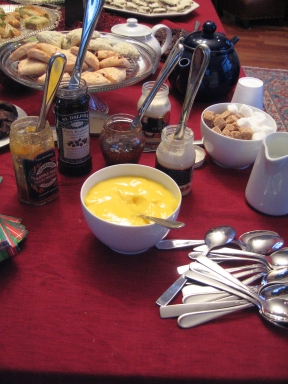 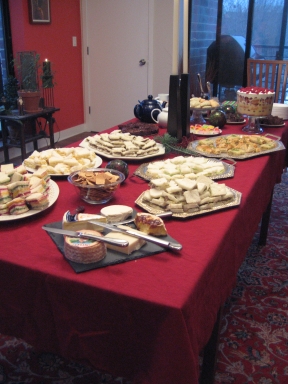 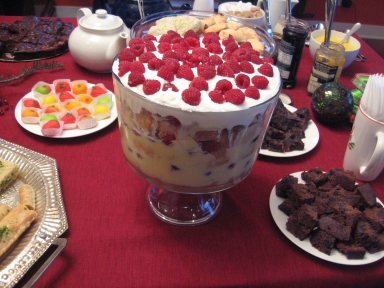 We were going to make cookies and a gingerbread house too, once people arrived, but we ended up talking instead, which is just fine. Heather and Aaron brought cranberries and popcorn to make garlands, which was much fun, and partway through the party, we did decorate our cute little tree...not to mention the bamboo. 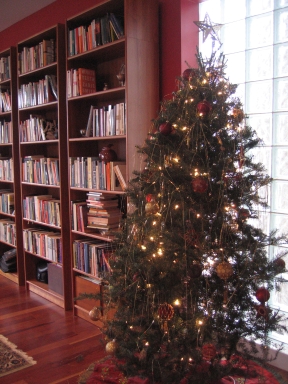 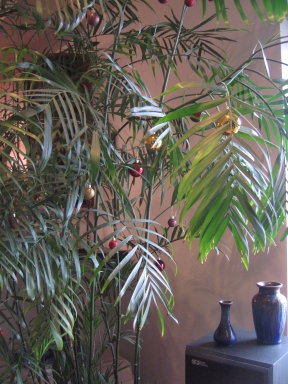 Ellie had a good Christmas party too -- maybe too good. While Kev and I were upstairs getting dressed, she was sneaking quietly downstairs, where she managed to snag a loaf of bread off the counter -- and then tear open and devour the entire loaf of bread in about ten minutes! Everyone was amazed -- she's really not a very big doggie, but somehow, it all fit, and she was still looking for more treats all through the party. People would have indulged her more if we hadn't told them about all the bread she'd already consumed. So she had to content herself with much petting from many guests. We tried to get Ellie to pose for us in front of the tree, but she was having none of it. This is the best we could do... 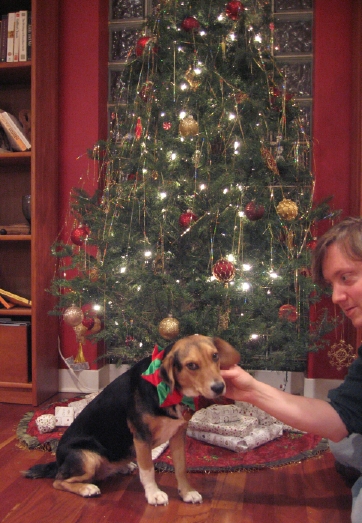 Sadly, we did have to put her in a kennel for Christmas. I'm fretting about her every day, but Kevin assures me that she hasn't just been crying for us the whole time. He thinks she's having a grand old time playing with the other doggies. We'll see. 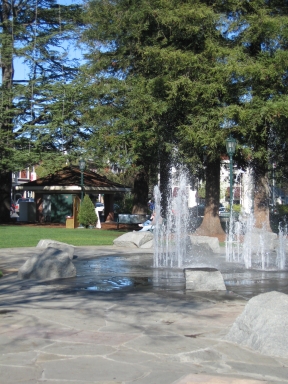 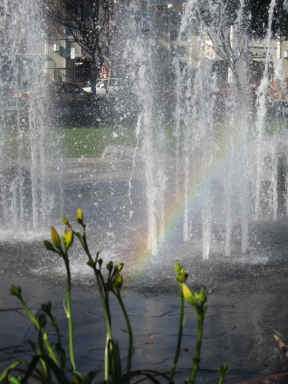 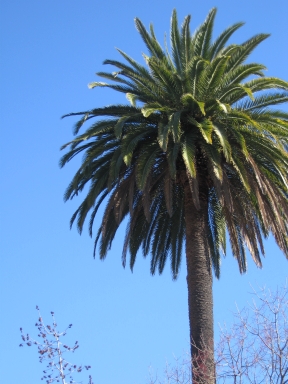 I came out a bit early and spent a little time with Jed, and then yesterday, I finally got to meet Jed's brother Jay and his wife Holly. We ate Indian food and talked for hours; a nice time had by all, I think, and we got into a really interesting discussion about the balancing act between research and...hmmserving the community, is probably the best way to put it. As exemplified in the actions of big drug companies and the universities. We also spent a while talking about trying to maintain mixed-income housing in cities. Knotty problems, very interesting. Smart folks!

Other than that, Kev and I have mostly been doing our very traditional Christmas stuff here. Last-minute shopping and present-wrapping (per usual, I was mostly done weeks ago, and he mostly hadn't started yet when he got here, but in the end, it's all done on time, so it doesn't much matter, other than for my basking in a smug virtuous glow). We went with his folks to church yesterday to see all the little kids in the Christmas pageant, which not incidentally finally gave me a chance to sing most of the carols I love. Yay, carols. Kevin doesn't sing, but he does make funny (quiet) snarky comments to me during Mass, which is a way of participating, I suppose. After that, dinner at the Benjamins, an annual tradition, with more cute kids and babies showing up every year -- it's just that time in people's lives. I think there were three pregnant women this time around. I spent quite a while helping little Jackson assemble his newly-received pirate's cove; much fun. He does cheat at pick-up sticks, though, I want to state for the record. His scoring system is -- inventive.

And today there are all sorts of traditions to come. We open stocking presents at nine (with stockings for the pets too, which means that Ellie gets a stocking this year!), then have Ann's traditional egg casserole breakfast. Then more present opening. Then resting. Then Christmas dinner, which I think will be lamb this year. And then, sadly, Kevin and I have to head off to the airport to catch red-eye flights -- he'll be heading home, and I'm off to Philadelphia for SALA and MLA.

A slightly truncated Christmas this year, but still a very merry one all around. I hope you're all having lovely holidays, wherever you are, and that you have loved ones to share it with you -- including adorable pets! :-) Merry merry merry merry Christmas!