It's funny -- something like three of you e-mailed to tell me that I should think about boy's names too. We will, I promise. :-) We just aren't thinking that seriously yet. I just learned that Sapna gave birth to her baby girl, yay! The funny part is that one of the baby's middle names is Maya, which is a name we thought about. Weren't really planning on using, though, so is okay. :-) They're using Gupta as a middle name too (Sapna's last name), with their daughter taking Steve's last name for hers. We could do that too, I suppose. Something Something Mohanraj Whyte. Hmmm. Might work okay. We'll see.

Kev's back to being his normal sweet self again; he had a couple of days of being definitely on-edge, but now he's back to being affectionate and reassuring and warm and lovely. He's taking good care of me. I think we're going to be fine.

Nilofer pointed me to a pregnancy calendar; based on that, it looks like I'm about at the end of five weeks now (they calculate it from the start of your last period, not conception, which I guess is because it's clearer, but still seems odd). I feel a bit like I missed a week or two in there somewhere, but okay. Based on this, I'm due May 26th, which means that odds are, I'm missing WisCon this year. Anyone want a Governer's Club reservation? 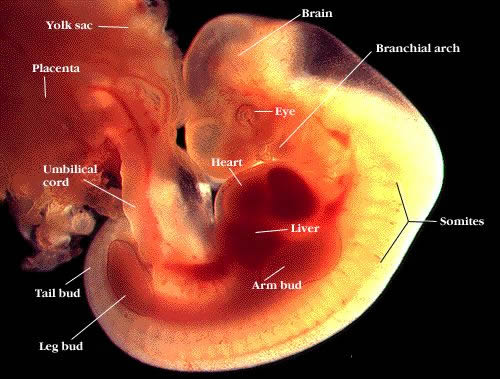 Apparently at this point, the little blastocyst has become an embryo. So weird. Generic embryo photo at right.

I keep having small freakouts. Like yesterday, someone casually mentioned that coloring your hair is apparently bad for fetuses. What? I had no idea. I got mine colored in a salon on 8/22, which I think is safely before conception, but I just redid the roots at home. I did use a temporary dye instead of permanent, which is supposed to be better, but still. Worrying.

And then last night, Elli was sleeping partly on me while we watched tv, and when Kevin helped her get up, she kicked out and hit me just below my stomach. It only hurt for a second, but I fretted about it for the next hour, off and on. I just keep worrying that this little embryo is not that securely attached yet. Apparently, one of the main problems with fibroids is that if the fertilized egg attaches near a fibroid, the fibroid may cut off blood to it as the egg tries to grow. I don't know at what point (if any) this stops being a concern. Frustrating.

It was reassuring to meet with Sarah yesterday for training; I had pretty much stopped working out, and she told me that while I should keep the intensity level low, regular exercise would be good for me and baby, and make the whole pregnancy easier. I definitely felt better after our workout, so let's just hope that I can keep it up. I'm wishing I'd done more serious working out earlier, before getting pregnant, as I'm currently a good thirty pounds over doctor-recommended weight. Sigh. Ah well.

We've started, cautiously, talking about some concrete plans. We had discussed turning either the tv room or Kev's study into a nursery, but I think we're actually just going to keep a crib in our bedroom, which is by far the largest room upstairs. It does mean that we'll hear baby if it wakes up, but we'd probably want to anyway, right? Nilofer's been advocating co-sleeping, and Kirsten's advocating crib in a separate room; I have no strong feelings on the matter, so we'll probably at least start by trying what Kev thinks is best, and see how it goes. I'm going to get rid of my desk (it may move upstairs to the roof, and become a planting station), and we'll put the crib and other baby stuff in that corner. My desk stuff will move to Kev's study, and we can share that space when needed. That should hold us until the kid actually needs a room of its own, hopefully.

It's good, having plans. Makes it all feel more real. Right now, it just seems surreal -- maybe because I'm not vomiting yet. Soon, I imagine...