Facebook Instagram Youtube Twitter Patreon Shopping-bag
Menu
We were very girly-girls today -- it was all-shopping, all the time. Not a whole lot of buying -- we're saving that for the end of the trip, when we know if we have any money left. :-) But we sure did a lot of looking!

We started with Laksala and Lakmedura, two government stores with controlled prices, selling traditional handicrafts. I plan to get a ton of colorful little elephant keychains (about twenty cents each) to bring back as gift souveniers. I was also struck by a happy elephant footstool and a purple rattan-braided elephant. You may see something of a theme here. And I was also tempted by some kitchenware -- intricately engraved silver-plated trays and branching candlesticks in three colors of copper (a style unique to Sri Lanka). There were many other lovely items, but mostly not quite my style. Somehow I can really appreciate and enjoy batiks, for example, without actually wanting them in my home; clashing aesthetic styles, I guess. I just asked Karina what she liked, and she said, "I liked lots of stuff!" Though she did seem quite enamored of a stuffed hermit crab, saying "That crabby's not too shabby..." I'm not sure what that means. She did buy a tiny silver-plated spoon, set with a little red gem, and with an elephant carven on the top. Most charming.

Then we went to Paradise Road, which is I think where the upscale Sri Lankans must shop. 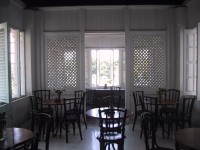 Very nice housewares, mostly made in Indonesia and the Philippines, I think. Sort of Pier 1-ish in feel, but maybe half to a third of the price. I am sorely tempted by some white ceramic square trays with the Tamil alphabet in black; very geometric and pleasing. And there were very charming elephant dishware -- all white, with a single simple black elephant in the center. And a wall-mounted branching candleabra, simple iron.

Following, we went to Odel, which we weren't so impressed by -- a large upscale mall, really, not so dissimilar from what you'd find anywhere else. Nice enough, and I did pick-up a bargain swimsuit, bright oranges and pinks, for five bucks. But fairly generic, aside from the sarong shop on the first floor. We were, however, impressed with the gelato place outside. I got a meltingly delicious mango gelato cone, and Karina got two scoops in a cup -- one of milo, and the other some sort of mint thing. Milo is this strange food this have in Australia, apparently, that is a chocolate malt powder that you add to milk. It has vitamins in it, and tasted like it too, I thought. (Karina is sad to hear that I thought so.) And the gelato place did get extra points for its charming caf facing a glass wall covered in falling water. Very soothing.

I still was being pretty resistant to actually buying anything, but the next place broke my spirit. Barefoot feels as if it's run by hippies, but yuppie hippies -- lots of handmade materials, care for the earth signs, small village productivity concerns, all in an upscale version of Asia. It's hard to explain -- it felt like a really good version of a Berkeley store. 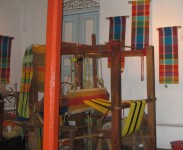 I attempted to resist a pink and orange silk sarong, but failed -- and in the process, ended up buying two silk scarves as gifts. Sigh. Today's budget was totally screwed. We ate in their little caf; Karina recommends their falafel sandwich, which had a spicier tahini than she's had before, and I quite enjoyed my tea -- a cheese and tomato sandwich, on buttered white bread with the crusts cut off, along with, of course, two cups of strong, sweet, milk tea. The courtyard we ate in was particularly gorgeous, and surprisingly cool underneath that fan, with strong breezes. Hopefully at some point, you'll get to see pictures -- for now, I will just mention that there were trees, and stone sculptures, and a koi pond, and brightly colored tablecloths and cushions, and it was all just cheerful and charming.

You would think that we would be done after that, but we made one more stop -- to Don Carolis, for wood furniture. Just to look. And in fact, I was mightily tempted by a solid canpied four-poster mahogany bed, very simple in design and rather geometric, but topped with lovely finials. Only five hundred dollars, which is just an astonishing price for a solid wood bed. But of course, there's shipping costs. I don't know how much -- I asked them to check. It may be too much, and there may be other styles I'd like better, and we did just buy a house, so we don't actually have any extra money for furniture at the moment...but something to keep in mind, at any rate. If people actually buy my book, then maybe I can buy furniture. (Karina notes that maybe a little more of our rainforest can be lost...)

Then we came back to the hotel, and you'd think that we were done shopping. But no. After half an hour's rest, we went to the Pettah district, a madhouse of outdoor bazaar shopping, which we took videos of which I would love to show you if I knew how to upload them. Someday. Insane. 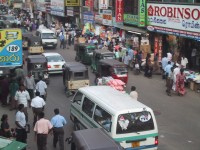 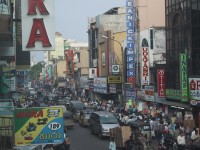 I bought the hopper pans my mother had asked me to pick up -- four for her, and four for me, because hoppers are so slow to cook that you need a pan on each burner in order to keep them coming at a reasonable rate. V. exciting. I'm sure my mother could have bargained him down to half the price, but I got about four dollars off his original asking price, which I felt quite proud of. And then I bought a cell phone, because my mother insisted that I do, so that she can keep in touch with me and not worry. It took longer than it should have because of charger issues, but the men helping us were very nice and it all got sorted out eventually. It did mean that we missed our chance to swim before the pool closed, which was very sad. I have not yet swum. (Karina notes that we almost swam last night, involuntarily.)

Back to hotel in an auto-rickshaw, which has to be experienced to be understood. A mad ride through streets that appear to have no traffic laws whatsoever, and I don't think we were actually likely to be hurled out the open sides, but I was hanging on pretty tight to the strap above, just in case.

And then a change of clothes, a walk down the street to the Taj Samudra hotel (the one I would recommend if you wanted a very luxurious place to stay, not quite as charming and old-world as the Galle Face, but still lovely), where we had an amazing Hyderabadi Indian at Navratna. The tandoori-pineapple vegetables and grilled paneer were particularly delicious, as was the sweet-pickle-stuffed chilies (large, green, spicy, juicy), and the saffron kulfi. Mmmm...

Afterwards, a long dark walk along the Galle Face Green, to the Galadari Hotel and back, a stretch where apparently, women just never walk at night alone, because we got an awful lot of annoying commentary from the men hanging out there, which we mostly managed to ignore. The most irritating was one who just wouldn't shut up, and called Karina a "bad girl" at the end of several comments we couldn't quite make out. Luckily, he didn't actually follow us, and she seems to be amused by the whole thing. I do think it's a safe walk -- there were a few families around, and even someone giving kids a pony ride at one point. But it's startling to see how circumscribed women's lives are here. The hotel staff all seem quite startled when we want to walk somewhere instead of being driven in a nice safe car by a nice safe hotel-vouched-for man. I suspect this will annoy me more and more as the trip goes on.

1 thought on “We were very girly-girls…”