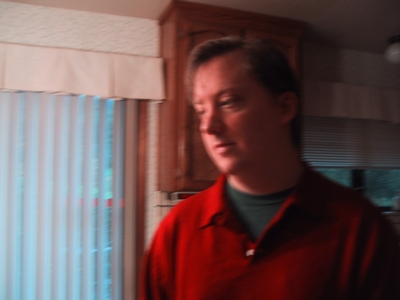 I spent a lot of time in the last few days looking at photos of Kevin. At one point on Christmas Eve (or perhaps it was Christmas Eve's eve), I was sitting in the family room reading a few chapters of A Christmas Carol, and Kevin brought over an early photo album he thought I might like to look through. It was all photos of Kevin, from his birth to about age three. I had made him look through a similar album of me when he was at my parents' house for Thanksgiving -- I suppose he thought it was only fair to return the favor. And later on, Kevin's mother, Ann, brought out a book devoted to Kevin as a baby -- including photos of him right after birth, nine weeks premature. The diaper just hung on his tiny body, and his arms and legs were impossibly fragile. It scared me, that photo. It made me want to feed him.

You know, usually when I take photos of people, I find myself trying (not so consciously) to make them look as conventionally attractive as possible. Mostly, I think that's because I want them to like the photos, especially if I'm thinking of posting them publically, and people generally like to be perceived as attractive. Straightforward enough. Of course, a 'pretty' photograph doesn't necessarily correlate with a good photograph. Someday I'd like to just be able to start taking good photographs, rather than fretting about whether people look pretty enough in them. Most people won't be happy with any photographs, even if I think they look perfectly lovely, to judge by my own reaction to photographs of me. :-)

Taking photographs of Kevin may be the best way for me to start down that path. Because I react pretty much the same way to every photograph of Kevin, including the ones of Kevin as a nearly bald baby, when it looked like his head was the size and shape of an alien creature. Every single one makes my heart thump, just a little bit. I have the same emotional response to them all, an insane surge of fondness -- and in an odd way, that makes it easier to look at each photo simply as a photo, rather than worrying about whether the person in it looks pretty. It looks like Kevin, which is all that seems to matter.

Sometimes, I manage to take a photo which looks even more like Kevin, to my eyes. And while I still have no real idea of how it appears to other eyes -- how well-composed or crafted it may seem (what Barthes refers to as 'studium', if I remember right, the studied, planned effect of the photographer), that photo pierces through me. Even if it's over-dark, or out-of-focus, or just at an odd angle...I can look at that photo for a long, long time.