Skip to content
Somewhat busy morning already; in theory, I have a student stopping by, and the kitchen was kind of a disaster. So up a little early to shower, dress, get milk at Cucina so I could have tea, do dishes, straighten up. I could avoid all this nonsense by meeting him at my office -- but then I'd have to go into the office, which is really even more trouble; the dishes did need to be done eventually, after all. And this way, I got to pick up a calorific croissant at Cucina to go with my tea. Yumm... (and yes, M'ris, calzones are definitely on the approved list. Bread and cheese and nice hearty tomato goodness...) Pretty much everything on the approved list for M'ris is on the not-approved list for Mary Anne. :-) But sometimes a croissant just needs to sneak its buttery deliciosity in anyway...

I'm feeling okay this morning, though coughing a little more. Sigh. Still, in a good mood, which is a vast improvement over last night. Sad, low-down mood. And I wanted to talk to Kev, but he was frantically racing to meet a NSF deadline for this morning. Ah well. It's not as if I wanted to talk to him about anything in particular; I just get...off-kilter, if I go too long without talking to him. I don't think this is a function of dating him, in particular; he's just been my friend for so long now, and the kind of friend whom I tell everything to. We're trying to hold on to that part at least; occasionally, deadlines intervene.

Most of the deadlines these days have to do with SH stuff; Jeremy's had to resign as newsletter editor, so I'm taking over in the interim (any of you want to write a newsletter every week? Easy job, but requires commitment). Got to send one out today. Then there's the Best Of stuff; I'm still getting responses from authors, but in the interim, I've organized a tentative TOC. That was fun. :-) It looks like almost everyone we wanted will be participating, which is cool. There was some scrambling to get an editorial up today...and speaking of which, I'm not sure M'ris's comments about it were quite fair. She takes Audra to task for sexism, but I'm not sure I believe it's sexist to say that, mostly, women seem to write more of the kind of mother-daughter narratives she's looking for in sf. It would be sexist to say that only women *can* write such things, but that's not what I hear Audra saying. Just that so far, it seems to mostly be women who do it well. I don't think it's homocentric to say that mostly women write better lesbian smut scenes -- I think it's true, for right now. I don't necessarily think it'll be that way in the future, and there are certainly exceptions to the general rule now. It does help having inside information, though, when you're going for versimilitude. :-)

10:30 and no sign of my student. Hmm... I guess I'll give him half an hour and then give up and start really working. I need to write a lit crit paper today; oof. Also a little student grading, prep for next class. We're focusing on dialogue this week; I'm going to have them actually stand up and recite little monologues next week. Fun. :-) Some of them are gonna hate it, but it's good for them. I love saying that. Maybe it's a good thing I don't have kids.

What I'd really like y'all to do today is go over to SH and take our brand-spankin'-new Reader Survey. We're collecting various kinds of info, and if you read the magazine at all, it would really help if you answered the questions -- and even better, if you answered all the questions, or at least parts 1 and 7. Right now there's a sharp drop-off in responses after part 1, and part 7 is at least as important to us.

You should also read the new issue, of course; in addition to Audra's charming editorial, there's a lovely little illustrated story by Angela Boord (who I met at WorldCon), some new funky post-apocalyptic art, an interview with the very sweet James Van Pelt (another person I've met at various conventions), a cool little lemon physics poem, and a review of Robin Hobb's Liveship Traders series (which I keep getting tempted to buy whenever I go to the bookstore; maybe this review will finally convince me). Great week!

10:15 p.m. Oh, I so didn't write a paper today. I did all sorts of other fun stuff, and some of it was even vaguely useful -- I even made a egg curry and took a photo of the cool egg-shaped bubbles to share with you all. But write a paper, I did not. Bad grad student. No biscuit. 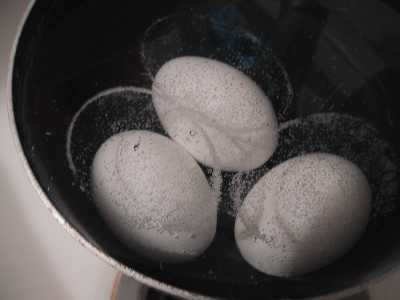