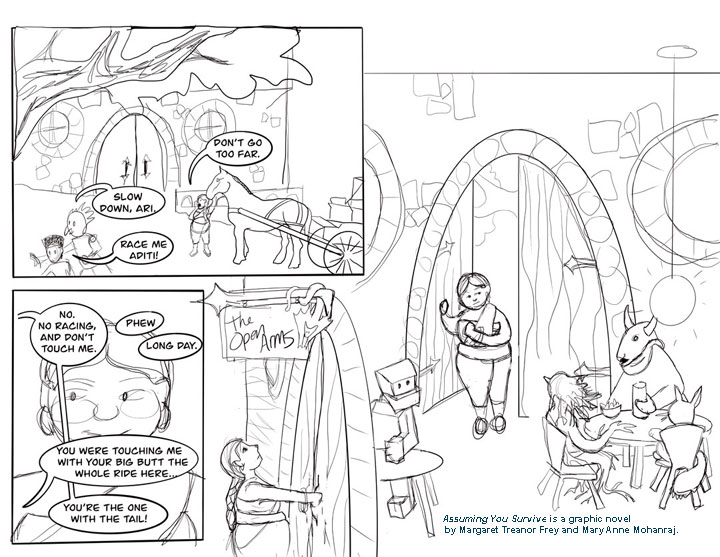 Okay, so here’s a big announcement, and I swear, we didn’t actually plan this to coincide with the Great British Baking Show dropping its new season today, but we probably should have, so let’s just pretend we were that clever. We’re writing a comic! It’s called “Assuming You Survive”! Margaret Treanor Frey (my college roommate) and I have been working on a comic for a while now, since WisCon 2019, I think, so about a year and a half. We’re now far enough along that we’re ready to start showing it to the world more seriously — we have a plot arc for season one, for example. There’s going to be a bake-off!

WHAT’S IT ABOUT?
“Assuming You Survive” follows the daily adventures of mythical creatures who have retired from adventuring to live together in a small, out-of-the way village and raise their families. They soon realize their quirky town is unavoidably attractive to human ‘adventurers’ (and their money belts) and figure what the heck, might as well make a buck. If they could handle their lairs and dungeons being constantly plundered, they can handle a bunch of tourists. Right?
The story opens with Sita, the only fully human character, moving in to town, looking for a place to raise her ‘part-monster’ children. It goes on as a slice-of-life story in a fantasy setting, strangely devoid of vicious betrayals or gut-churning slayings, and becomes about building community and found families. But with dragons. And merfolk. And a baking competition. Woot!
WHAT’S THE PLAN?
We have the first issue close to finalized now, and the plan is to keep working (which is mostly Margaret, since we’re co-writers, but she’s the illustrator, and I just peek over her virtual shoulder and try to make helpful comments) through the fall. (For anyone else interested in doing this kind of collaborative work, I’ll note that we’ve found Slack and Pinterest super-useful tools for us, since Margaret lives near L.A., and I live near Chicago.)
When we have a full season ready, we’ll start posting it weekly as a web comic. I’m kind of hoping for January 1, but we’re not quite ready to pin down a date yet.
Then at some point, we’ll aim to ALSO release it as a full color graphic novel (I imagine there’ll be a Kickstarter linked to that, so you can pre-order it there, if you like).
HOW CAN WE GET THIS IN FRONT OF OUR HAPPY EYES???
Right now, we have a website, Facebook group, and most importantly, a Patreon. If you’d like to help this comic come to fruition, and are in a position to support it, we’d love you to join us at the Patreon. There are various treats for supporters at different levels ($1 / month and up), so pop over and check it out! Patrons also get materials e-mailed to them, so they never miss any goodies!
PATREON: https://www.patreon.com/assumingyousurvive
You’ll also be able to read the blog and follow along on our site and/or the Facebook group: 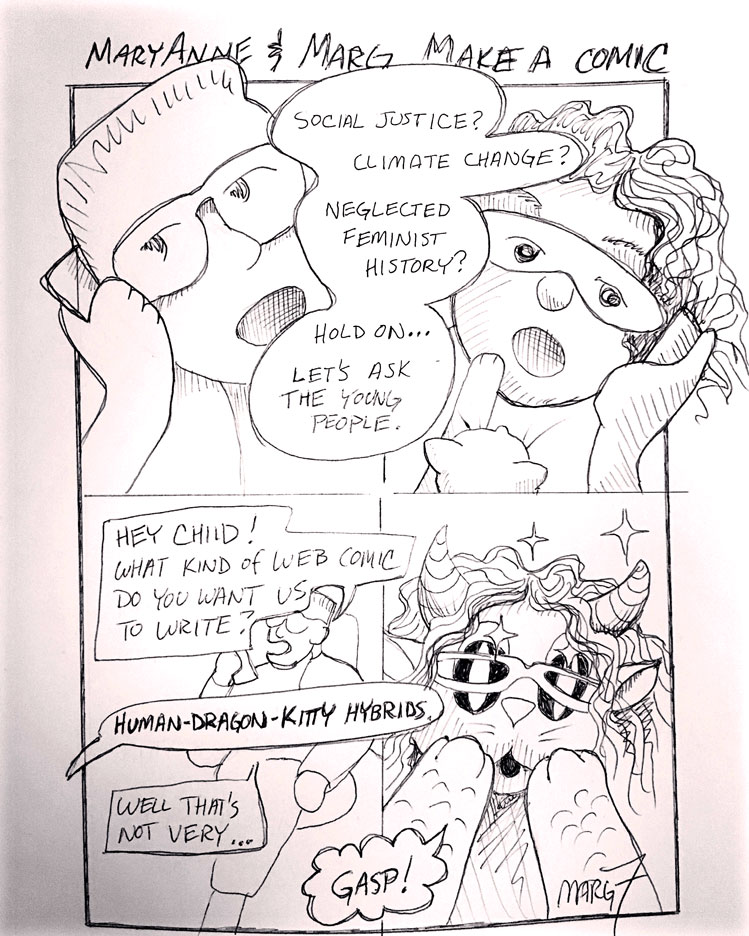