Skip to content
And some days, I'm just so glad to be living in Chicago again. I don't know if I mentioned that we live pretty much downtown? Oh, Greektown is a bit south and a bit west, but not too far. Yesterday morning I worked at home, for about six hours or so, then exercised, then walked downtown, reading Malory as I went. (On the way home, doing the same, an old man said as he passed me, "Girl, you must really love to read!" I said, "Yup." And he said, "I could tell.") When I got downtown, I got a crossaint and chai at Borders and then settled in to read the latest Laurell K. Hamilton Meredith Gentry novel. Meredith is a faerie princess living in L.A. She has to alternate having sex between several gorgeous men who are all trying to get her pregnant so that she can become queen of the unseelie court (and incidentally save her life). No, really. It's pure smut, and much fun. Slightly less serial-killer-ish than her Anita Blake novels too, at least so far.

I read until dinnertime, then did a little shopping (found a gorgeous filmy red skirt, 60% off -- excellent) and walked home. I've been eating at home this last week, trying to be sensible and lose some weight -- yesterday was a day to treat myself, since I'd gotten back down to my pre-birthday weight. :-) So I went to Artopolis for dinner and had a frutti di mare salad -- marinated seafood piled on top of greens with feta cheese and fresh tomatoes and olive oil. Yum. With a small piece of fresh brown bread. But the salad was huge -- I only wanted half of it. It was very odd to order a salad for dinner and then only eat half of it. I had a pear for dessert, and wasn't hungry afterwards. This healthy eating stuff might become a habit after all... I've been exercising some too, back to doing my NY ballet workout tape. It's not really aerobic, but it has a killer abdominals section -- killer for someone like me, anyway, lacking in abdominal muscles. :-) Well, okay, I *have* them or, as Roshani pointed out yesterday, my liver would be spilling out and if I think I have a bulgy tummy now...okie, that's just gross. Never mind. The point is that those ab muscles are, very slowly, getting stronger. I can feel them reshaping themselves, underneath the layer of flab ("Let us out! We're trapped!) Kind of fun.

I was sort of hoping to wear a sari to the Hugo Awards -- that's only a week and a half away, so I'm not sure if it's feasible. Not sure if y'all are familiar with saris -- the key point is the your skin is bare from just below your breasts to your hips -- not really in front or in back, but on the sides. So stomach muscles are helpful. I won't wear it if it doesn't look good, or if I can't walk in it comfortably...I'm *really* not used to wearing them. But I'll try it and see, I think. If not...well, then I have an excuse to buy a new dress if I like -- from what I hear, people really dress up for the awards. And all my formal outfits are in Australia at the moment, for complicated reasons...

It's funny -- in some ways, deciding to lose weight and get fit kind of feels like deciding to be a writer. (Yes, I know that sounds goofy -- be patient, and it'll all make sense.) At least for me, I can't ever just decide to do something so big (that's going to involve actually sacrificing some things and changing the way I live) -- I have to say it aloud, make a commitment in front of other people. And once I do that, it seems more real -- real enough that part of my brain decides I'd better actually work on it -- and it's then easier to work on it, somehow. Hm...maybe I'm not actually making sense. But it feels similar to me. I wonder if other writers think about weight loss the same way? :-)

I'm not sure if it's the exercising or the weight loss or what, but I'm having more energy too. Still able to do things at the end of the day, despite having worked all day. I like it.

I've been going through just masses of backlogged e-mail -- I'm not sure how I got so far behind. I'm now answering mail from late June. Sigh. But in there was some fun stuff...including a few requests to change titles in the kingdom, which your gracious sovereign is pleased to grant out of her goodness and bounty. See how pleasant it is to be part of my kingdom? You should all run right out and join us...

Lots of convention planning too. I've just signed up for WindyCon, a local convention the weekend after World Fantasy. I may a bit brain-dead for it, but I figure I ought to go anyway -- always nice to be in touch with the local fandom, especially since they they tend to go out and buy your books and art and such. :-)

I still need to register for World Fantasy. So many things to do... 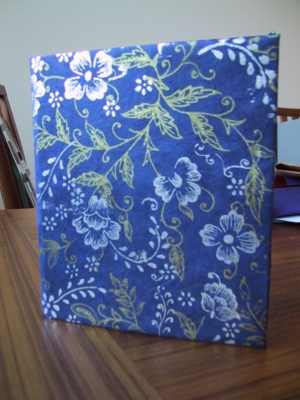 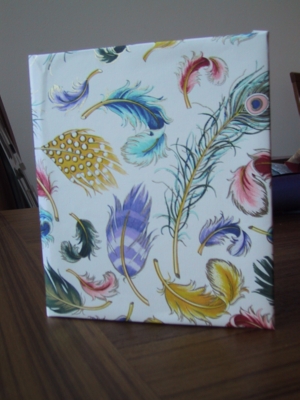 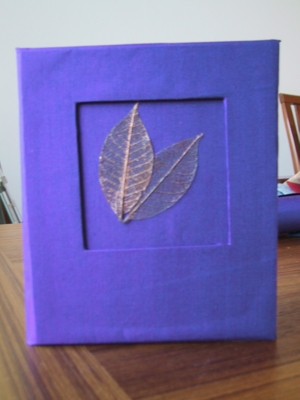 And this one was really fun -- I punched holes in the cover, and threaded wire and beads through it. 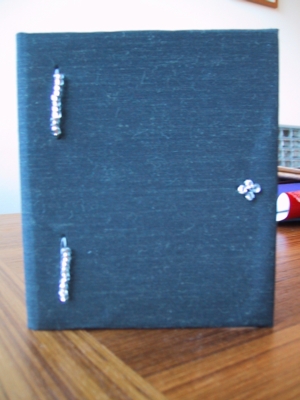 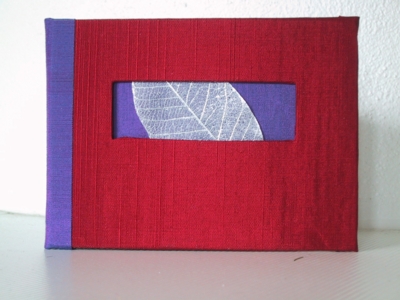 If you live in Chicago and have met me OR if you work in the sf field and read this journal, you should've gotten an e-mail invitation to potluck brunch this coming Saturday. If you didn't, please drop me a line and remind me!

As you can see, a few more books. I'm particularly pleased with the little silver leaf book; not only does it have some nice colors and such, but it's a new size for me, an octavo book. That means that the sheets inside it were folded into eighths (most of my books are quartos, folded into quarters). It took a little extra thinking to figure out how I was supposed to do the folds, so that I still had the fold at the spine that didn't get cut. It's a charming little book, though -- just tiny. You could slip it into a pants pocket. 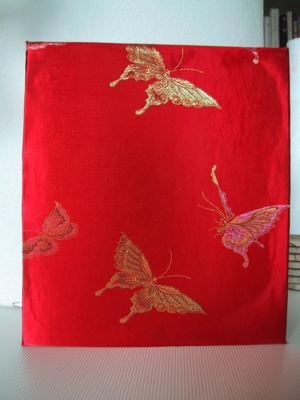 I also experimented with something totally different -- making a photo album out of a premade interior. On this one, I just made the casing and inserted a ready-made book block, all out of archival-quality materials. This one is 8x10, and I rather like it, though I mismeasured a bit, and so the last page doesn't lie as flat as it ought to. There's a lot of measuring in bookbinding! I'm making one more photo album -- it should be done tomorrow (much gluing in small steps and then waiting 24 hours for the glue to dry properly). It'll be even larger, more of a wedding album. Here's hoping I measured right this time! Still, despite the error, I rather like my red butterfly book; I think it'd make a really nice album for someone. And hey -- errors just prove that it's handmade, right? :-) 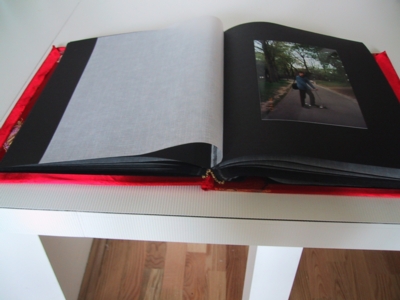 I spent an hour or so yesterday talking to Ben Rosenbaum (SH writer) about whether or not he should go to an MFA program. By the end of it, I think I'd convinced him that if he does anything, he might be happier in a Ph.D. What have I done? I swear, schools should hire me to talk about grad school. There was a time when Sherman was nicknamed The Happiest Goth. I could be The Happiest Grad Student. :-) 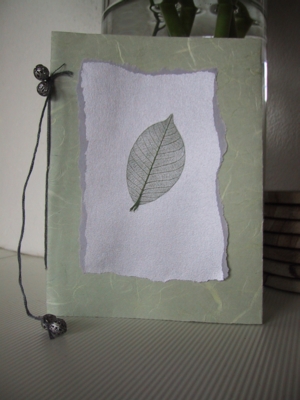 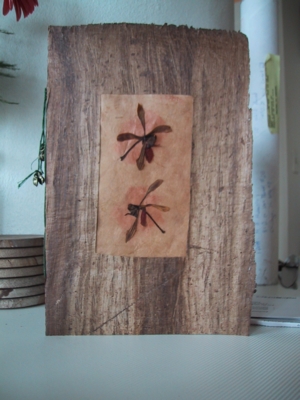 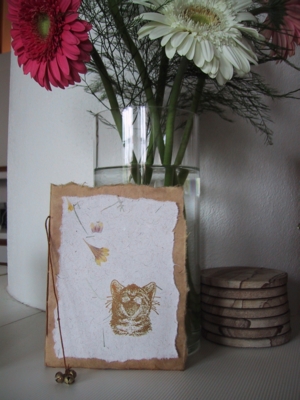 I went ahead and purchased new OS X versions of Fetch ($25) and GraphicConverter ($30), even though I could've just kept using my old ones in classic mode. See -- I'm not a total cheapskate. :-) It's just a matter of things being priced reasonably. And I'll grant you, I'm a little more inclined to buy things from people other than Microsoft...

I've probably done enough playing around with the new system for today. I'm mostly alternating cleaning (dishes, laundry) with artwork today, actually. I've almost finished making a very fancy photo album and another collage. I'd actually like to finish all my artwork pretty soon -- I don't really want to be workign on it up 'til the last minute. I think I have enough little books at this point -- just time to make a few more collages. I'm just finishing "readings in a lost november"; after that, I think I may do "on the uselessness of time travel" (which you haven't seen yet, because I sold it to Star*Line, and it's not out in print yet. Tim has kindly given me permission to go ahead and make a piece of art out of it anyway. :-)

Kira's just taken off, btw. Was lovely having her here, in a nice, low-key way. 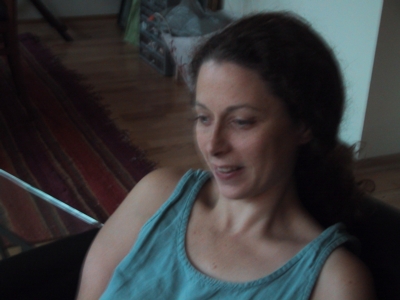 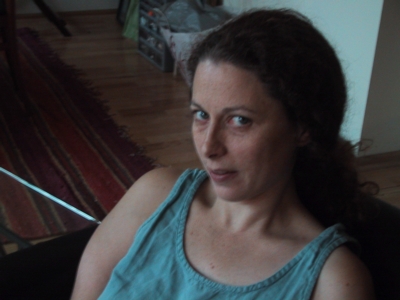 Boy, y'all are helpful! I've been flooded with good advice -- thanks! I think I'll keep the starting up of classic on start-up for now; I don't actually boot up that often anyway, and I use Word 5.1 (which I don't want to upgrade 'cause I like this version best) from the get-go when I do. My standard work pattern is to have Word open along with a terminal window and a browser and bop back and forth between the three (occasionally opening up Fetch or Graphic Converter).

Figured out how to drag onto the dock, so that's much better. Word and Terminal are there now, and I've added Mozilla. We'll see how I like it. I believe that IE may be the best product out there for this, but I'm still annoyed at them over the whole bundling issue. Kev likes Omniweb; I may try that. We'll see how it goes. Jon says that he has encountered a bunch of bugs with Mozilla, including trouble entering text into text boxes -- that would be really annoying; we'll see if it comes up for me.

I went ahead and created new playlists; I've been meaning to reorganize my iTunes stuff anyway.

So really, I think I'm basically up and running, in about an hour or two of work. Not a bad changeover at all. David, you may want to think about switching -- very straightforward procedure. Basically 'stick in the disk and click install.' Kind of fun messing with the new settings.

The one thing I do miss is having my hard drive in my apple menu -- I used to used the cascading menus (is that the right term?) constantly to open up stories and such buried several levels down. It doesn't seem to do anything like that anymore?

It is not clear to me: I want a nice AI, dangit. One that'll hold my hand and tell me it'll all be okay -- and maybe sing me lullabies when I'm having trouble sleeping...
Well, so far, reasonably so good. Appear to be installed. Have found the terminal program and checked e-mail successfully. Have put a photo of Kevin asleep as background picture. (That won't stay there, but it may be amusing to watch his reaction.) Have used IE successfully. Still need to see if I can still use all my old programs (Word 5.1, Quark, something other than IE for the web). Having trouble adding items to the dock -- they say just to drag them over, but they don't appear to stick. Weird. Can drag things off just fine (and it's sort of cute when they go poof!). Would ask Kev for advice, but he's fast asleep and likely to remain so for hours. So if you have thoughts, feel free to send them in...
Having intermittent problems with telnet and Netscape. Have gotten frustrated enough that am going to upgrade to System 10 in order to attempt to escape them entirely. Wish me luck.