Skip to content
Woke up from a dream where I was scolding a grad student for avoiding her grading. I don’t supervise any grad students. I *am* the grad student.
It’s 7 a.m. on a Saturday, brain, and I’m not even behind on my grading. Ease up!
Please follow and like us:

Yes, I left my laptop in my office on Monday. Whew. Coming in just now on Wed to teach and confirmed. I *thought* so, but wasn’t positive I hadn’t left it in a classroom…

Just one in a series of discombobulations this week. Sigh.

I *also* apparently scanned in the reading for the students whose books hadn’t come in yet, *and* uploaded it to my computer, *but* failed to actually send it to them via Blackboard, so half the class hadn’t done the reading (none of them contacted me yesterday to ask why it hadn’t gone out, of course). It was okay, as I really wanted to spend today’s class on something else anyway, but contributes to general sense of frazzled and dropping balls. GAH.

Really lovely class just now. We’re at the end of the second week, so have mostly settled into figuring out who is actually in the course, so took time today to do introductions. It meant we didn’t get to the reading (since the first half of the 50 minute class I spent on reviewing some logistics and talking about the Great Conversation and their part in it, etc.), so “Queen of the Black Coast” and Saunders’ _Imaro_ are pushed off to Monday, but I think it was entirely worthwhile.

I asked the students (in my “American Writers of Color in Speculative Fiction” course) to introduce themselves by talking about whatever aspects of identity were important to them.

They were so brave and so honest — they talked about mental health, about race and ethnicity and social class, about religion and gender and orientation, about disability and physicality, about their challenges and their fears and their passionate commitments to social justice and alliance and I am just so proud of these munchkins.

They are so much braver, articulate, and knowledgeable about other peoples’ struggles than I was at this age. They are warm and welcoming and kind.

They give me hope.

Foggy campus today! That’s my office building, with my office on the 19th floor, lost in the fog… 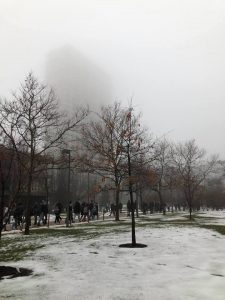 Okay, finally feel like we’re in the swing of the semester properly, second week in. Getting sick first week = NOT RECOMMENDED.

But I don’t look (or feel) horribly sick anymore, I barely coughed in today’s lecture, and we had a great discussion of Amal El-Mohtar‘s “Biting Tongues” today. They loved the poem, btw. Popular choice! I think if I teach it again, I’d like to pair it with an excerpt from Persepolis, and Carmen Machado‘s “The Husband Stitch” — I was already planning to teach the latter later in the semester, but I think it would work better if I brought it up to pair with this poem. Might also have them listen to / watch the Little Red Riding Hood song from Into the Woods, and read Nalo Hopkinson’s “Riding the Red”.

We also reviewed helpful organizational strategies, like actually LOOKING AT THE SYLLABUS before e-mailing me a question, and PUTTING DUE DATES in your calendar, possibly with a reminder slightly before. So that was hopefully good, and will ease everyone’s stress going forward.

Plus, a student and a colleague both complimented my boots within a single hour (they’re my ‘I wrote a book boots,’ and they are v. fancy (but were on clearance, which made them only somewhat outrageously expensive)), so that was nice.

Double-plus, I really do have a very nice view from my office, even if I have to walk right up to the window to see it properly. Oh, Brutalist architecture — you are challenging to love.

We part our lips. We breathe our breaths.
We bite our tongues and swallow blood
knot stones into our stomachs, heave
and spit red salt where words should be,
stitch shut our mouths with stubborn thread
to spare our tablecloths.

They come with axes
cut us to pull the good girls out.

They leave us with our bloodstone bellies
our sewn up mouths, our halted breaths,
and a river for a bed.

Until one of us
with sharpest teeth
and shredded mouth
rips silence from our lips
with a battle–cry kiss, and says

We paint with tumblebroken words
we sing loud with our speaking hands
unmake the bodies shaped for us
and lip to eye to fingertip
we spill our red–mouth stories out
and listen, taste them on the air
with our forked and biting tongues.

Day 7 of cold: woke up after much coughing in the night, feeling reasonably rested nonetheless (due to the NyQuil that kept dragging me back under). Only felt mildly terrible on waking, which is a great improvement from the utterly horrible waking of two days ago.

Cold, despite wearing thick sweats. Have managed to get Anand breakfast, and am now tucked up on couch with coffee, meds, and under a blanket, so I feel marginally ok right now, though I don’t expect it to last if I try to move. Still hacking cough that is close enough to full body that it makes me tired. Bodies, bah.

Going to try to rest as much as possible because I really don’t want to have to cancel tomorrow’s classes too; it’d be a rotten start to the semester. We’ll see.

7:50 addendum: I realized I’d forgotten a key piece of paper I needed in order to work on the couch, so I went upstairs and got it, in the process getting a second sweater to put over my sweatshirt, and came back to find Ellie ensconced on the couch, so now I have a dog to snuggle up with and am actually warm, which is something.

Dogs are the best. 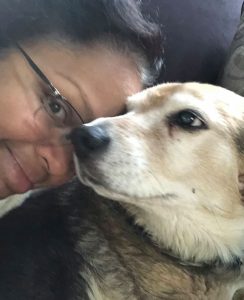 I’m actually calling in sick today, which I hate to do the first week of the semester — I don’t think I’ve ever done that before. But since I’m breaking into a hacking cough every three minutes or so, and I feel too woozy to drive, prudence seems the better part of valor here.

At least they have plenty of reading to do, and I just hope missing today doesn’t interrupt the bonding flow of the first few weeks too much; it’s so important to establish the right vibe and expectations with the class in those early weeks. Sigh. These mortal bodies. What can you do?

One of the points raised in this conversation, about teaching South Asia in the academy, is that we think a lot about how to create safe spaces for students, where they can productively think and learn and grow, but we don’t have nearly that kind of attention to the safety of faculty.

Someone asked me after the panel, “Where is the duty of care for us?” 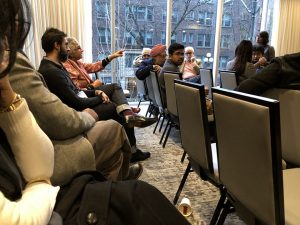 It’s a good question. There are days when I’m exhausted by the topics that come up in class, days when I’m driving home with Kevin and I comment enviously that it must be so much easier not having to deal with any of this in a math class. I chose this work, of course.

And I think it’s incredibly valuable having me, in my brown, queer, female body, standing up in the front of the room, for a variety of reasons. But it’s tiring. I’m tired, people. And there are days when I am not sure I have the emotional fortitude to engage as directly with the material as I would like.

(It’s easier on the page sometimes, but even there, especially if you’re active on social media, it can get vicious and frightening. Ref: Meghan Elison‘s recent essay on the topic, that I posted to my wall a few days ago: https://uncannymagazine.com/article/writing-with-my-keys-between-my-fingers/)

At the end of this panel, I ended up standing up and talking about a few incidents I’ve experienced recently, where hostile students were aggressive enough towards me that I was actually a little worried; I ended up talking to both Kevin and my chair about those incidents, documenting them. I don’t think either will turn into anything, but it was unnerving.

As we discussed in the room, every single professor of color there has experienced similar incidents, and it seemed, unsurprisingly, that the women among us had experienced more of them. It’s gotten worse in the last year or two. America under Trump, I suppose, and an emboldening of background racist ideas that live in people’s subconscious.

We talked about strategies for combating it, and I do think some of it can be lessened with appropriate framing of the class in the first days of the semester. Talking about background racism up front, discussing privilege, defining the terms. I already do a lot of that, but one professor said she gives them handouts at the start of the semester, and perhaps I should add that too, just so there’s something authoritative on paper that they can reference, rather than perhaps half-listening to the words I’m saying. It might help.

I particularly want to call out something helpful Rahul K. Gairola offered. I’d said that I found myself wondering if I’d done something differently in my teaching that led to these incidents (been more blunt, let a little more of my frustration show, perhaps?) — and he said that that while he appreciated my self-reflection, that I shouldn’t give in to gaslighting, or as he called it, gas-white-ing.

If I thought I was suddenly getting a lot more hostility from a few of my students, I probably was. And it almost certainly had nothing to do with anything different I’d done. The world has changed a little since Trump’s election. That’s all.

So now we resist, and come together in community to strategize, to seek and give support. Sometimes to grieve. I’m glad I was able to take the time to attend SALA, to attend this panel. It made me feel a little less alone. I hadn’t even realized how much these incidents had bothered me, until I got up and started talking about them.

Documenting this all here, in the hopes it will help someone else. Onward, to another semester on Monday. I’m teaching postcolonial lit., and writers of color in SF/F. Plenty of fraught material to come.