Skip to content
Kev and I mostly haven’t done Valentine’s Day gifts, in part because he was sort of anti-Valentine’s Day for a long time, and then there was the long stretch where we were breaking up and getting back together and everything was terribly confusing and often miserable and definitely not romantic. I had some rough Valentine’s Days over the years. V. disappointing holidays, often somewhat teary, in a resentful kind of way.
Then we settled into this relationship more happily and solidly (about 13 years in?), but also soon thereafter decided to have kids, and so we were very tired and also not very romantic. But finally, almost 28 years in, the kids are older and we’re less exhausted. We’re solidly happy with each other, and he actually got me a gift this year, which was very nice.
Even better, it was the best kind of gift, a gift certificate to one of my favorite nurseries. I got to pick out some roses for myself! Ebb Tide to add to the little bit of formal rose garden in the front garden, Julia Child in honor of Feast coming out this year, and Eden Climber to try on the back porch pergola. 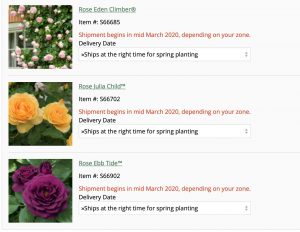 I also got him a gift, but a v. silly one, picked up at Target on impulse when I was buying strawberries and dried fruit for dipping in chocolate. A notebook printed with geometric symbols for my mathematician, and the words “Acute Notebook” printed on top. It is a v. silly gift because he probably won’t even use it on campus because all the other mathematicians will laugh at him. Oh well.

(I got myself the other one, “Written in the Stars” with constellation print — I’m hoping to try actually writing some notes for the SF novel in it, see if it helps me think differently, more productively / imaginatively, than typing does.) 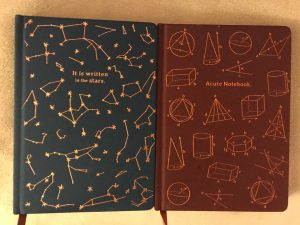 *****
Addendum: All this reminded me of 2001, when Kevin did try to get me flowers, in the midst of a hard time for us, long-distance and not sure we were going to make it through, me in Salt Lake City in grad school, him in Chicago. I ended up writing a prose poem about it. 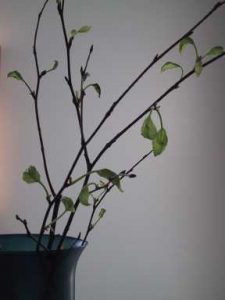 flowers and branches, 2001
it started on the worst kind of day, the kind of day when your boots pinch and your head aches and there’s an itch on your back just where you can’t reach it. I had no one to scratch it. he was there and I was here and it was my own choice so I couldn’t exactly complain but I certainly wasn’t happy. he had done something, I can’t remember what, to make it worse instead of making it better, and I just hurt. so I asked him to send me flowers. please. he sounded startled but agreed and that was a small victory though bitter too. nine years together and only recently had he decided that it would be acceptable to give me flowers. as long as I
didn’t take them the wrong way.
he had given me flowers twice at that point. firstly: when I was terribly sick, at the instigation of our old lover who was visiting town. she chose them, orange mums. secondly: when we were buying groceries at the small gourmet store and I asked him to buy me some flowers. he agreed. I chose them, yellow daffodils. he did pay both times, so technically they were from him. more importantly, he agreed they were
from him. baby steps.
these flowers that I asked to be sent to me were another baby step. he agreed. casually, and I wasn’t sure that he would remember. when days went by with no sign of them I assumed that he had forgotten. he didn’t often forget things but sometimes he forgot quite important things. then a message on my machine said that they had tried to deliver flowers but I hadn’t been home. then there were three days of missed messages and missed delivery attempts and after three days of this the flowers, all the flowers, started to feel like they were maybe more trouble than they were worth. he was apologetic on the phone, though he really had no control
over the situation.
finally they arrived, only two days before I was leaving town, and so there was little time to enjoy them. lilies, little red berries, tall elegant dry branches. they were rather impressive, actually, and he had chosen them himself, or at least something like them. the web page warned him that they did not guarantee the same flowers would be delivered. I determined to enjoy them, despite everything, and for two days I took very deliberate pleasure in my flowers. then I left. I thought about throwing them out before leaving. one of the lilies was already drooping, and they would be sad and dead by the time I returned three weeks later. I have an unfortunate tendency to see omens in this sort of thing, and expecting to be depressed, it didn’t seem wise to leave them to rot and greet me with foul scent and mold on my return. but they were still beautiful. I left them in the vase.
one week with him. a few days with an old lover. a little more than a week with my family. a miserable cold. when I took the taxi back from the airport I wanted nothing more than to be home, even though being home meant being alone again. I unlocked the door, turned on the light, climbed the stairs. and at the top of the stairs, the dining room, and in that room, the dining table, and on that table, the vase of flowers. the lilies had gone dry as dust, and crumbled to the touch; the red berries were dry and hollow. there was no scent. but the tall thin branches had put out fresh leaves, pale and green and very much alive. once I had cleared away the dust and rubbish, they were lovely.
my first thought was that I should make a poem about these branches, that they were just too good a metaphor to waste. something about not giving up, about how you think something’s dead, but if you just hang in there and clear away the old rubbish, you may find something beautiful, yadda yadda yadda, you know the routine, squeezed into a few lines, some good clean words, maybe some rhymes. but that was no good, really.
it was simpler than that in the end (though longer, too, unsurprisingly). those branches, those leaves — that is how I am, when I think of him. he is green leaves within me. I live in the heart of winter, and despite everything, he is the spring.
January 6, 2001