This is for Spoonflower’s ‘cozy reading’ challenge — I wanted to try something different for this one. It’s taken from a children’s book I published many years ago, The Poet’s Journey, about a young girl who sets out to become a poet. (The original book was illustrated by Kat Beyer.) Kavi drew the two reddish dragons, so this one is a real collaboration.

It’s not available for sale yet, because I want to order a test sample and make sure the seamless repeat really is seamless — tricky, when you’re working with this much text.

I think this fabric would make a fun throw pillow for a kid’s bed. And I might sew myself a set of dinner napkins, just for fun.

Maybe I’ll design some simple coordinating fabrics over the winter break, so you could do a place setting, or a set of bedding? We’ll see…I think it’d involve having Kavi draw me some more dragons, so we’re dependent on the whims of a teenager.

The knitting dragon on stack of books, I might put on a greeting card, if she’s up for it. It’s so cute.

Here’s the relevant writing, for the curious:

“She stood at the entrance to a vast chamber, lit by a unicorn’s shining horn, and a dragon’s golden hoard. The dragon lay atop the pile of gold, and the unicorn was still firmly attached to its horn.

The poet almost turned and bolted, but before she could, the unicorn spoke.

The dragon snorted, and steam puffed out its nostrils. “Why shouldn’t she be frightened? I’m frightening.”

“You’re frightening to look at, Kiera-drago, but you have a heart of gold,” the unicorn replied.

“Hmph! Well, that’s as may be, Kaylei-corn. Don’t you think she deserves to be a little frightened, though, coming in here and disturbing us? Probably wanting to steal some of my little bit of gold or chip a piece off your horn. It would serve her right if I did eat her.”

“Oh no!” The poet found her tongue at that, horrified that the dragon would think her a thief (though the pile of gold was so large that she also couldn’t help wondering if the dragon would really miss a piece or two). “I’m looking for good paper.”

The unicorn tilted its head. “Good paper, is it? And why would you be wanting that?”

“I’m a poet. And I can’t write poetry,” she explained.

The dragon looked at the unicorn, and the unicorn nodded its head. The poet wasn’t sure what was going on, but it didn’t look like she was about to be eaten, which was good.

“Here,” the dragon said. And it moved aside a little, so that she could see what lay behind it. There was a huge pile of shimmering stuff — at first she thought it was silk, but then she realized that it was scales, shining cast-off dragon scales. “Take some of these.”

The poet stepped forward, slowly, and picked up a scale. It was soft, like the finest parchment, and while one side shimmered, the other side was palest white. If you could write on it, it would make perfect paper.” 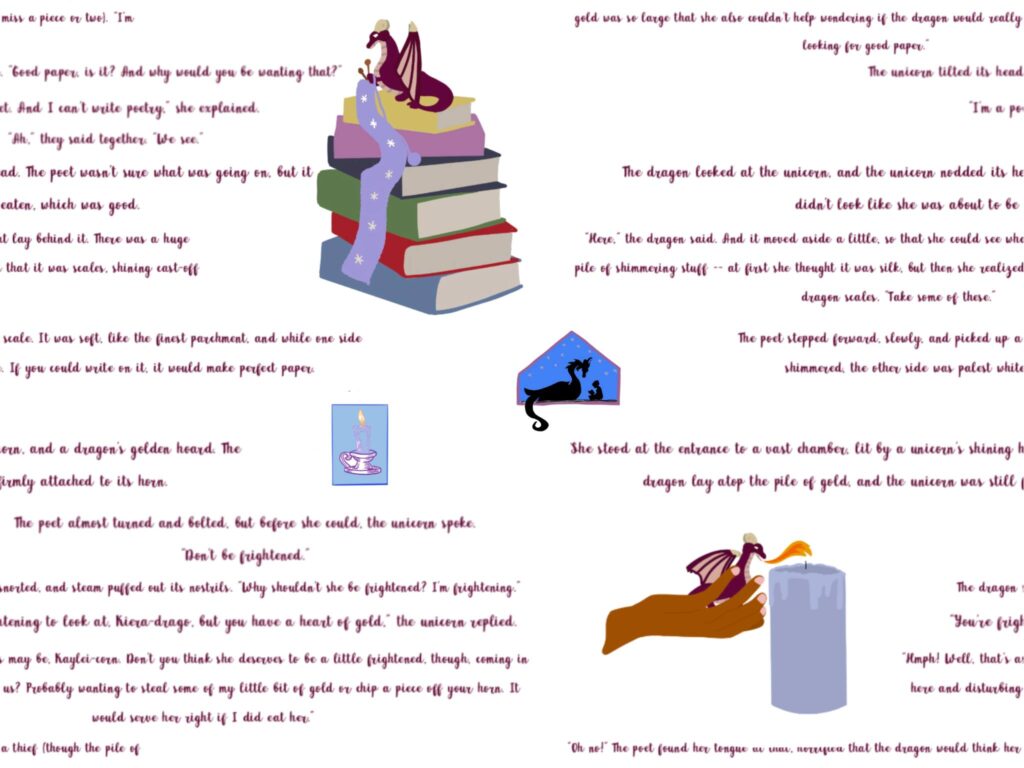