I was watching a re-run of the Great British Baking Show, and they had them making soufflés for the technical challenge (which, for the record, I have never made, Kevin makes the soufflés in this house generally), and one of the contestants said she’d never made a roux, and they were all ‘what, never?’ and she was all ‘shut up,’ but more polite and British about it. Poor thing!

I can’t remember when I first learned to make a roux, but I was probably at least thirty. Which is sort of astonishing to me now, because I do the basic, stripped down version of it all the time. I mean ALL the time. Basically every week we end up in a situation like the one we were in last night, where we had some leftover chicken thighs that had gotten a little dry, and some cooked asparagus that wasn’t so appealing on day two. We needed a little sauce, desperately. Roux to the rescue!

I generally do sort of a haphazard version of it. I set the water boiling for pasta, then threw a knob of butter in a sauté pan. Added some sliced red onion because I had it on hand and onion is never going to to hurt a savory pan sauce. If I hadn’t been feeling lazy, I would’ve peeled and smashed some garlic and added that too, but I was tired, it was a weeknight, we just wanted to eat something decent. Let the onions get golden, stirring a bit, added the chicken and asparagus, stirred it all together.

Now, I could’ve done a proper roux in a separate pan, but that would make an extra pan for cleaning up. No good. I just scooched the chicken and asparagus and onion over to one side of the pan, and tipped it a little so the melted butter gathered at the other side.

Added a bit of flour — not too much, or you’ll end up with something gluey and sad. Maybe 1/2 a teaspoon? I suppose it depends on how much sauce you want, though! Stirred the flour in the butter for a few seconds, letting it cook a little and start to get golden brown (raw flour, no good). There’s the roux, done! Then I added some milk, stirred it in (maybe 1/2 a cup?). Cream would’ve been good too. I happened to have some shredded Gruyere left over, so I stirred that in too. Tasted, added a bit of salt, and then stirred that lovely sauce in with my chicken and asparagus.

Somewhere in there, the pasta water had boiled, I’d tossed in some fresh tortellini (careful not to boil it too furiously, or fresh tortellini tends to burst; you want a gentle boil), cooked it 7 minutes, then drained it. Gently folded the tortellini into my creamy chicken and asparagus in sauce, and it was just enough sauce to very lightly coat the pasta. The kids loved it. Dinner was saved (and lunch the next day).

It should be a slogan, or a cooking show: Roux to the rescue! 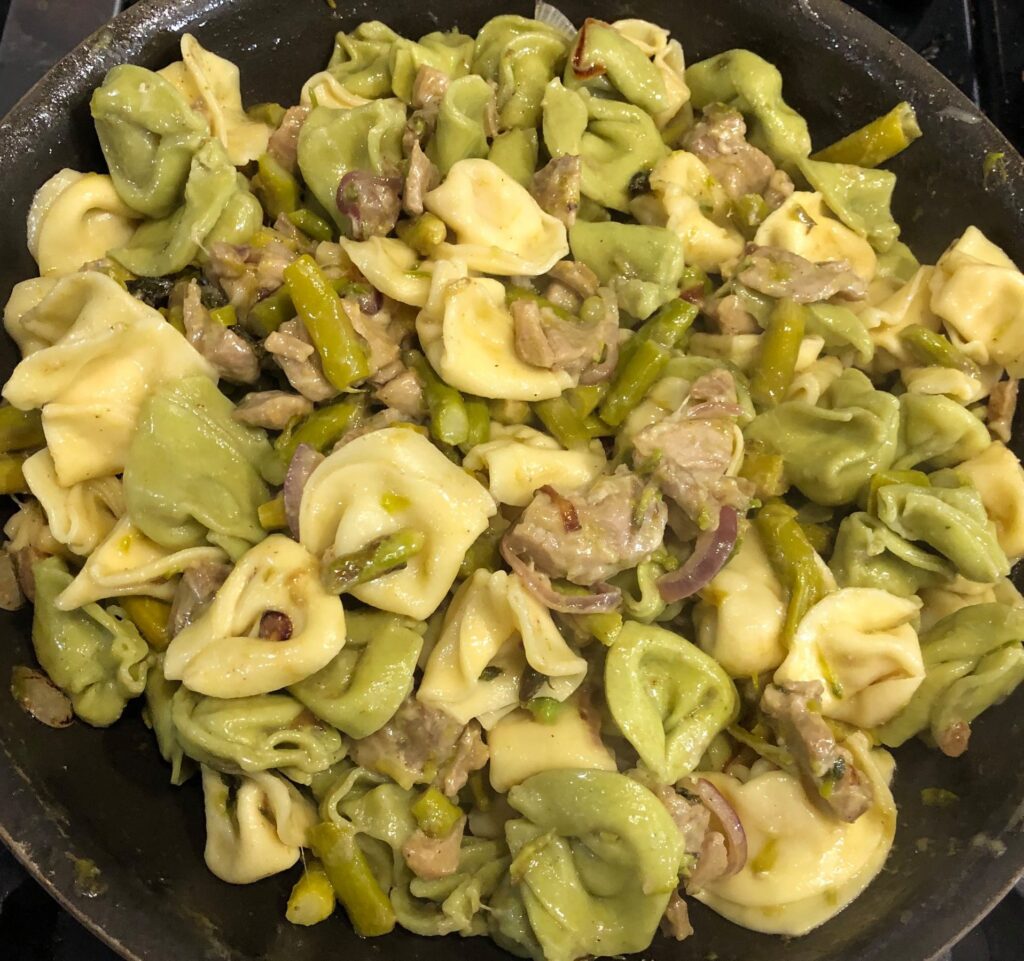