I really was tempted to make a Battenberg cake for Anand’s 11th birthday after the season premiere of GBBO featured them, but there were a few problems with that plan:

a) I suspected he wouldn’t like the traditional marzipan icing. Honestly, I don’t particularly like marzipan icing — I can handle a little of it on Sri Lankan fruit cake at weddings, but it doesn’t excite me.

b) I didn’t think he’d like the jam used to adhere the layers — we had a very nice birthday cake earlier this summer with jam between the layers and he scraped it all off. Why my children don’t like jam, when they love fruit and sugar, I really don’t know. But anyway. Kavi was worried that I might put jam in her brother’s cake, and I assured her that I would not. (I love jam in cake. Sigh.)

c) Most of the Battenberg cake recipes I looked at also incorporated ground almond in the cake mix, and I wasn’t sure he’d like that flavor either. It would be sad to make him a birthday cake he didn’t like, and while he could scrape off marzipan and jam, he couldn’t scrap the ground almond out of the cake! So that seemed right out.

But in researching, people mentioned checkerboard cakes, and it looked like it was basically the same concept, with regular cake (no ground almond), frosting instead of jam to adhere the layers, and more frosting on the outside. Perfect.

I told Anand I was thinking of making him a two flavor cake, and I knew he wanted chocolate for one of the flavors. I offered him a choice of vanilla, raspberry, strawberry, apple, or mango for the other flavor, and he went for vanilla. Not what I would’ve picked, but hey, it’s his cake.

The next step was making decisions about pans and cutting. Most recipes for checkerboard cake call for 4 9″ cake pans. I have only 1 of those, and the prospect of using it 4 times seemed a bit much.

I might’ve done it, but they also called for 6″ and 3″ cookie cutters (or sometimes 5 1/2″ and 2 1/2″), and I don’t have any cutters bigger than 5″. I didn’t want to buy specialty items just for this cake, so I reluctantly abandoned that plan. (It does look quite a bit simpler than I what I did, and more likely to hold together well, so I’d recommend looking for those if you’re going to try it.)

Instead, I used a rectangular cake pan (of which I only had one). I used this recipe for the cake mix, baking half of it as a yellow cake, and then adding cocoa and baking half as a chocolate cake. (My halves weren’t quite even, so I ended up cutting off some excess chocolate cake. Hey, they do that in GBBO all the time. I think it’s legit.)

I didn’t use her frosting recipe, mostly because I didn’t have any heavy cream on hand, and just made a classic buttercream instead, which is really what I like best anyway. (Passionfruit buttercream is to DIE for.)

Then it really was pretty simple — just cutting it up and alternating layers to make the checkerboard lines. I did a lot more little squares than most such cakes, which gives a pretty fun result — the kids at the birthday party were mildly impressed.

But that many squares also makes the cake a little less structurally sound, especially since the classic cake batter yielded a pretty soft cake. I suspect Battenberg, with the ground almond, has a slightly more cohesive result that’s a little easier to work with (and jam is easier to spread than frosting).

I didn’t try to frost vertically between layers, just horizontally, and that held it together BARELY enough. More frosting on top and sides — I’m not very good at that, and definitely didn’t have the energy to try piping, but sprinkles cover a multitude of sins.

Overall, pretty easy, honestly, and would do again if someone wanted one, though I might make them buy me a large cookie cutter and at least one more 9″ cake pan first. I still kind of want to try the Battenberg someday, but I think it’d probably have to be for a more grown-up event. 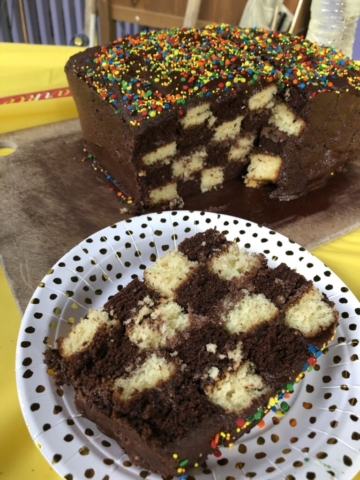 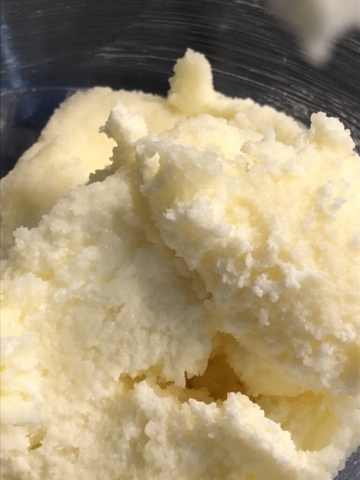 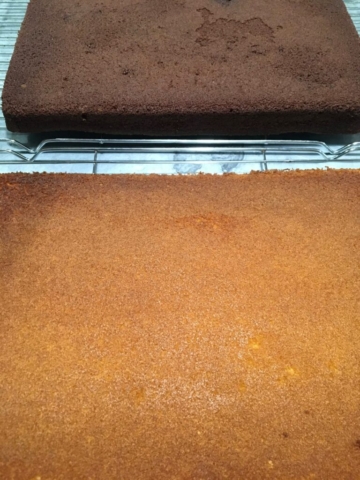 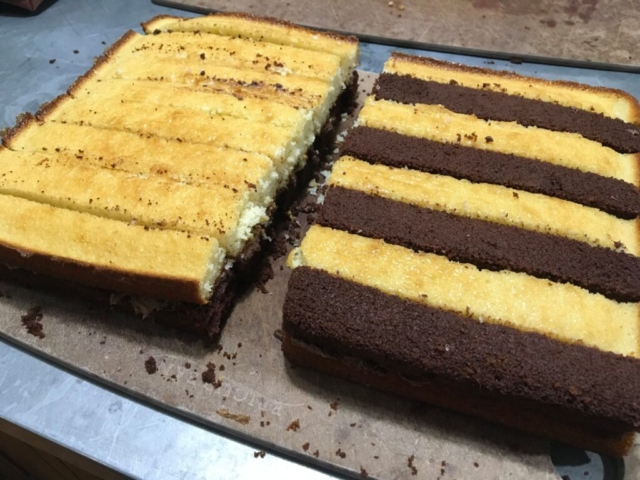 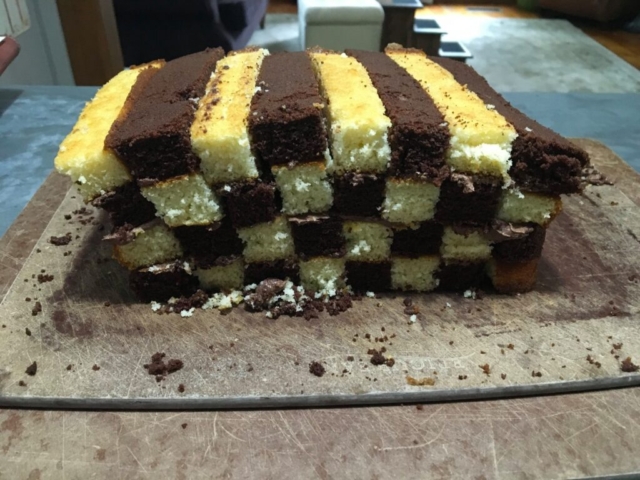 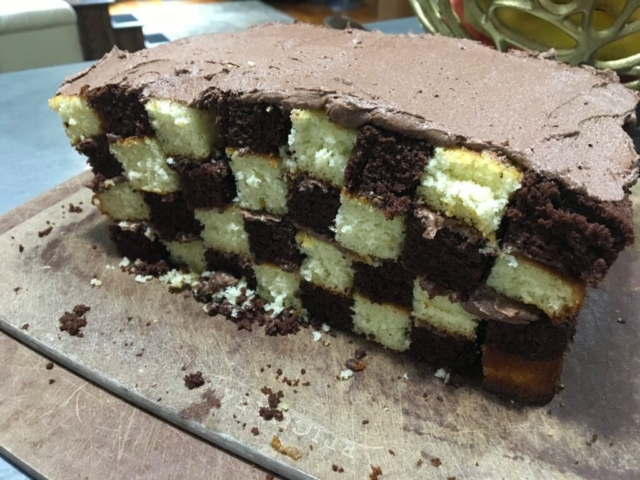 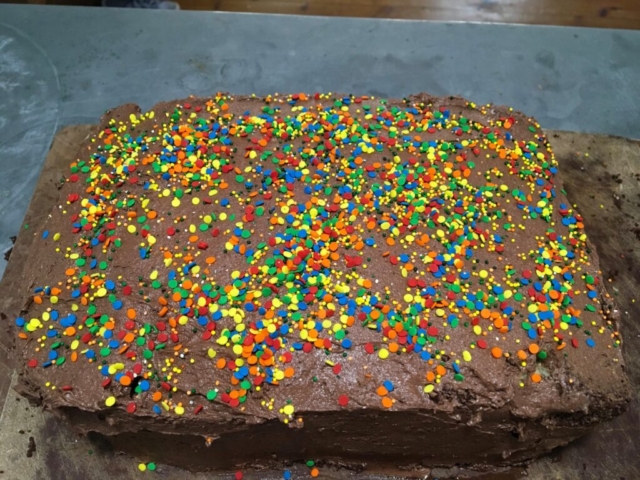