Skip to content
It hurt. That’s what I remember
about scraping coconut as a child,
struggling with dark metal clamped
to the edge of the kitchen counter,
afraid of the sharp grating blades.
My arm, unmuscled and unaccustomed,
ached after just a few cranks round;
my mother mostly offered critique,
rather than praise for my efforts. Too often
I would scrape and scrape, ask if I had done
enough. She came to inspect, sniffed –
there is so much meat left on there still!
I’d try again, and err in the other direction –
no, no – don’t scrape it so thin, you’re getting
husk in the coconut! Amma would have
excelled in a classic French kitchen,
exacting and precise, demanding perfection,
always disappointed in my failures.
I went away, and for years subsisted
without coconut. When I started to cook,
I bought sweetened coconut by mistake
in the baking aisle, and ruined a curry.
Eventually, I found dessicated coconut,
learned to rehydrate it with a little hot milk,
or better, coconut milk – just thirty seconds
in the microwave. Ammama, my grandmother
in the old country, had no such devices.
Frozen coconut is better, found on Devon or
in Westmont, where South Asians gather,
though once you thaw it, you must use it all
quick quick; it won’t keep long in the fridge.
Ammama didn’t grate her own coconut.
Labor was cheap; every morning, their cook
rose early to grate coconut for the day,
fresh from the tree. A little pol sambol to
accompany a fresh egg hopper, and another
servant chasing me around, begging me
to eat, just one bite, please. If I ate,
they could have their own breakfast, finally.
Now, living near cold Chicago, I shop online
for a coconut grater. I peruse suspiciously,
read reviews, trying to decide whether
to go old-school or modern in design.
A part of me doesn’t trust that ergonomic
will grate correctly; a little pain is required
to create the tastiest dishes.
When it arrives, I will try to persuade
my own children to help me grate
the coconut. Not because I need the help
of their unmuscled, unaccustomed arms!
But if they grind a little sense-memory
into their bones, then someday, maybe
they will buy their own grater, knowing
fresh coconut is best. It will sustain you

down the years, across vast distances. 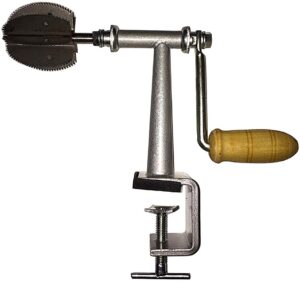