One last thought, and then I’m really going to start writing. Kevin and I spent a while yesterday talking about Anand and e-learning. We have a guest room with its own bath, which means that in theory we could have an au pair living with us. We’ve never done that, mostly because it’d be hard on Kevin, who is a lot more private than me, to have another adult person in his space.

But we did pause and think about it a little yesterday, specifically about this scenario:

– various friends of ours have college student kids who have recently learned that the fall will be remote
– said kids are not thrilled about doing college from their childhood bedroom
– Anand, entering 5th grade, has ADHD and has a tough time generally with staying focused on schoolwork (he’s not currently taking any meds, though that might change)

– so maybe one of those college kids would be interested in living with us for room & board + a bit of money, and in exchange, supervise Anand for e-learning in the morning, so I can write in peace, out in the shed. They’d be helping him get signed in at 8, settling him in, sitting at the dining table with him through the morning, answering questions as needed and keeping him on track, rather than wandering off
– Kevin or I would take over after lunch, so they’d have lots of time to do their own schoolwork — and if they had morning synchronous classes, we could set them up somewhere nearby to work, and they could just check in on Anand periodically
– they might also do a little house / yard / cooking work, if interested, for pay

In the end, we decided against it. It would require it be someone we really trusted to stay very low-risk in their own behavior, and we didn’t want to be in the position of trying to police a college kid who wanted to go out every evening to hang out with friends, sleep around (the way I did in college), maybe even go to bars, etc. And as I said at the beginning, it’d be hard on Kevin to have someone else living in our house.

For our family, it didn’t make sense, but I wanted to mention it here, because maybe it would be a good solution for someone else.

Kevin and Anand think that if we can help him get oriented and settled into work for the first week of school, he’ll be able to do it on his own after that. I’m going to ask Kavi to come and work down at the dining table with him, which should help both of them. (Kavi’s pretty self-sufficient with her work, in 8th grade, but does tend to slack off a little as time goes on; we saw that in the spring.) We’re also hoping that when the weather is nice, sometimes one of her friends will come over to work with them, and they can all go out to work on the front porch or back deck. Her friends are pretty studious too, luckily.

Hopefully, that’ll be enough, and I’ll be able to work in the my shed in the mornings without too much need to supervise. But we’re also reserving the option of negotiating with his teachers, if they’re open to it, to ask for some leeway on class attendance / homework doing, if Anand can test out as needed. We’ll see who he gets for teachers in the fall, and how flexible they are.

We’re also reserving the option of pulling Anand out entirely and unschooling him for 5th grade (and we’re lucky to be comfortable doing that; he’s ahead of grade level in most things, and we’re not worried about him being able to catch up on anything he falls behind on) — but we’re hoping to avoid pulling him out, since we don’t want the public schools to take a financial hit. We’ll see how it goes. 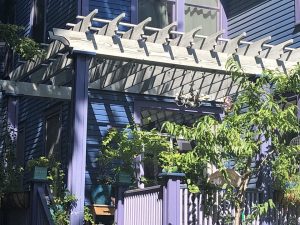