Hey, folks. I hit some pandemic weariness last night in a big way — ended up bursting into tears for quite a while, while Kevin and the kids tried to comfort me. The last month or so, I think we’ve been doing too much retreating into our separate electronic spaces to help cope, and I just got very lonely.

They have now promised to take Mommy on walks, and play board games with her, and do more chores together, which should help. I need more socializing than I’ve been getting, clearly.

Kev and I spent a while talking last night about where we are in terms of caution, etc. On the one hand, we’re both pretty firmly on the side of not wanting to contribute to community spread while R is over 1, and though IL was doing pretty well for a while, dropping nicely, it’s stalled out the last few days. We’re a little under 1, but not by much, and with more places opening up, I wouldn’t be surprised if we ticked up again in the next few weeks. So Kev’s inclination is to mostly just keep sheltering-in-place for some time to come.

But on the flip side, I clearly don’t do well with this much solitude, and although the kids aren’t complaining, they’re also doing more electronics-coping than I like to see. Given that I expect that we’ll likely see Covid-19 spiking again in the fall with a second wave (or for some of the country, just an ongoing first wave, sigh), and I expect we’ll be back to strict shelter-in-place by October / November, it seems that for mental health, we should take advantage of this window.

Slowly, carefully, wearing masks and social distancing, of course. I think that’s where we are right now, as a family, planning to do some cautious additional activities in July-Sept, keeping an eye on infection rates, being prepared to pull back if it seems needed. I’m writing all this out in part because I think it’s helpful, seeing what other people are doing, and how they’re thinking about things. We have to set these norms together.

– we’ve been doing big orders of takeout 2 times / week since all this started, which is quite a bit more restaurant food than we usually eat, to help support our local restaurants. It’s a little bit of a budget hit, but do-able for us. We’re sticking to that going forward, and not actually going to restaurants, even to outdoor seating, which might be relatively safe for us (though the thought of a margarita and a shared plate of nachos with a friend is SO appealing right now, it makes me want to cry just thinking about it), because it feels unfair to have servers (bending over patrons to put down plates) and kitchen staff (working shoulder to shoulder on a crowded line in a fully operational restaurant kitchen) forced to work in these conditions. It’s a tremendous failure of government, acting like it’s safe for restaurants to re-open when it’s clearly not, just because they don’t want to spend the funds to support them during this time.

(Caveat: I have friends who own / run food establishments, and some of those are open now, and for at least a few, it seems like they can manage it in reasonable safety for their staff. I’m thinking of The Daly Bagel, for example, which does curbside pickup + carryout orders. But for the vast majority of restaurants, I think that’s just not possible, given their layout and staffing needs.)

– there’s a new pottery studio that opened up two blocks north of us on Marion (Via Clay), and I’m super-excited for it, but even though it’s pretty airy and is limiting to no more than ten masked people inside at a time, it’s still indoors with recirculated air, which just seems like an unnecessary risk, so at least for now, we’re not starting classes or the kid camp there. We may re-assess that in a few weeks, depending on how R does in Illinois, because I really do think Anand (my ADHD son) in particular would LOVE the tactile nature of a pottery class. If we don’t go soon, we’re at least buy some gift cards for future classes, since we definitely want them to stay in business.

– we talked about outdoor camps, and while I think those are relatively safe, if they keep the kids masked and in small groups and spaced out, that seems like it’s also challenging to do, esp. with random high school students tasked with managing it. I spent a while thinking about whether I could manage running such a class for a week or two (outdoor game design class? tables set up in the backyard six feet apart for about 4-6 kids?), but it would be a lot of work, and it would be super-hard to keep the kids from running over to each other to look at each others’ projects, etc. And of course, I’m still working pretty full days over the summer, so running such a camp would mean pushing work time into the evening / weekends, which I’m trying to avoid. I don’t know. We haven’t ruled the idea out, either having the kids attend an outdoor camp or running a mini one ourselves, but we’re not doing anything like that yet.

– for exercise, tennis seems ideal, but it was miserably hot and humid here last week, and I don’t think any of us would’ve been happy about showing up for a tennis lesson in those conditions; tennis is also somewhat discouraging to start, in my experience, and I don’t think either of my kids would take to it well right now. We’ve been doing backyard badminton instead, which seems to work, thankfully; the kids are having fun with it, esp. when we play too. (Still haven’t managed to find a reasonably priced above-ground pool, or would’ve seriously considered eating up our whole backyard and killing all the grass for that. Kevin thinks the pool companies are ramping up production, and they’ll be more available soon, but I’m not convinced.)

– there are some outdoor yoga classes happening now, and I’m planning to take one; my daughter might join me for that. My son and husband are less inclined, but I’m wondering if anyone is doing tai chi in the park? I think they might be up for that.

– we talked about hiring a high school student to come teach our kids soccer in the backyard or at the park ; Kevin wasn’t enthused, but I might end up pushing for it, if we don’t manage to get them exercising more on our own in the next week or two. We also talked about hiring my personal trainer from the Y, if she’s available / willing, to do the same, although that’d cost a lot more, and we probably couldn’t afford to have her come as often as a high school kid. $60 / hr vs. $15 / hr. We’ll see.

– a friend just got an inflatable tandem kayak (!), and she said on FB that she was taking it to local creeks and such, and I want to follow up with her on where she was going, because that seems like it might be a great option to do with the kids, if there are relatively isolated areas to go to

– we wanted to do more hikes in the forest preserves or go to the beach, but the chatter on the mom boards makes it seem like it’s almost impossible to do in a socially isolated way, and then there’s the bathroom problem, sigh. But if there are good places within 1 hr drive, so we can do a morning trip and not have to worry about public bathrooms, maybe we’ll do some more of that. (I am okay with pee-ing in the woods, but my 13-year-old daughter is currently horrified by the idea…)

– also in the conversation was vacation. Usually, taking at least 7-10 days in summer to visit grandparents is fairly key to having a break from our work lives, resetting our sanity, etc. That seems unlikely to happen this year — both sets of grandparents are on opposite coasts, so it’d be a lot of driving to even attempt, the kids get carsick very quickly, etc. We thought about renting a small house in the woods, which seems relatively safe in a non-crowded area, but I really would like such a place to have access to water in some form — a lake to kayak on, for example — and from the chatter on the mom boards, it seems like those may all be booked at this point, because we’re not the first to have that idea. Gah. If you know of such a place, let me know? Willing to drive up to 4 or so hours away.

– I’ve set up a six foot table on the porch, with folding chairs on either end, and Kavi and I are going to start having friends over to hangout — outside, with masks on most of the time, but removing them to eat / drink as needed. We need the socialization.

Anyway — that’s where we are.

Anand and I started listening to _Zombies, Run!_ together this morning on a walk together, and he thought it was pretty funny, which is good — I’ve also gotten worried about just how sedentary he’s gotten in the last three months. I told him he was going to start growing into his video gaming chair soon. If we can do a walk every morning and work up to jogging / running with the app, it’ll be good for both of us. We followed it with a short board game of Lanterns, which was also fun, and then I sent him off to wake his sister so she can have breakfast and they can do their morning chores. 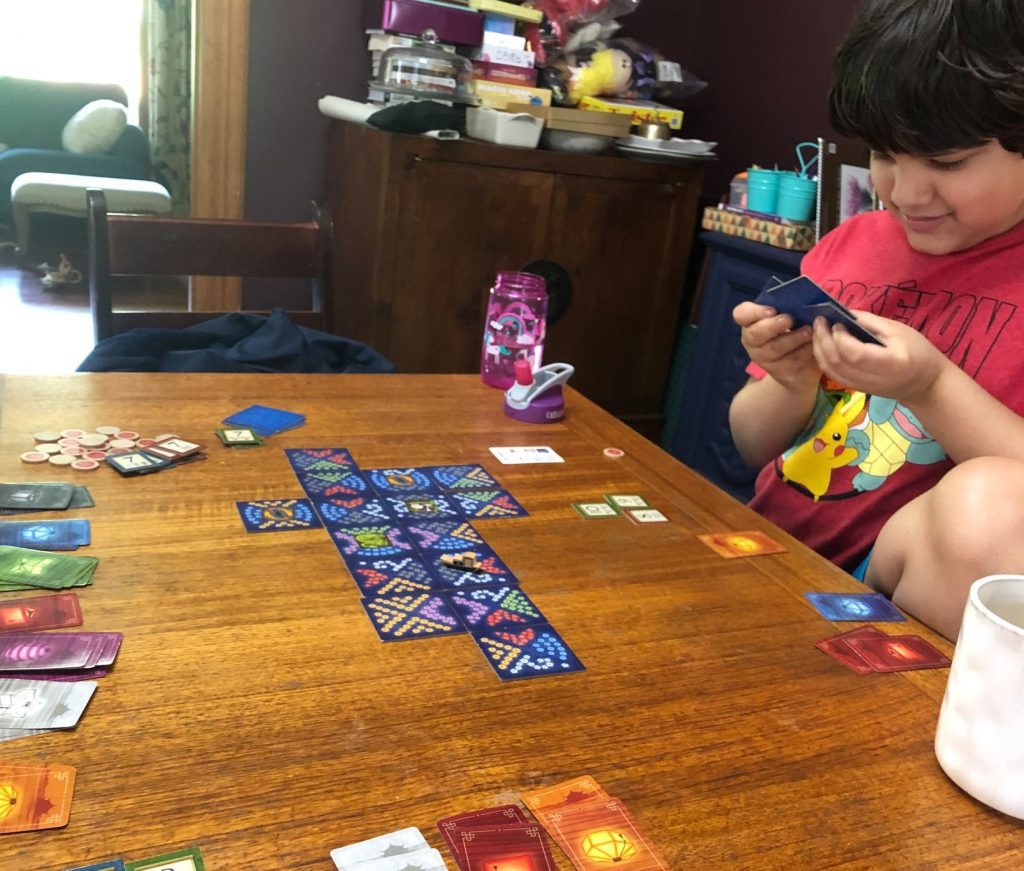 I keep setting up routines (very helpful generally for me with ADD and my son with ADHD), and then I think I get a little depressed from pandemic isolation, and then I get lax about reminding the family, and then they get lax, and then we just all watch TV / play video games too much, and then I get frustrated, and then we have to set the procedures up all over again. We’ve mostly sorted out the joint house cleaning, at least, over the last month, which is a vast improvement, but there’s a long way to go otherwise.

Charts. This morning, I’m going to spend some time setting up some schedules and charts, printing them out to hang on the wall, so the kids can tick things off as they go. Maybe Kevin and I need charts too. We’ll see. Also time to write back to my therapist and schedule that next appointment…phone therapy isn’t ideal, but definitely better than nothing.