WHEW. I was behind on a Wild Cards revision for George — it was almost done, but I had sent it to a few people to check my protagonist’s Mexican American 3rd generation Spanish.

I hadn’t implemented their suggestions yet when George’s e-mail popped into my inbox yesterday, and I admit, I got super avoidant about opening his e-mail, because what if he was mad at my lateness? What if he hated the last revision I’d sent him? I’m pretty conflict-avoidant, though I can usually nerve myself up when I have to.

Today I finally made myself (3 hours after I intended to) actually open the files and implement the Spanish edits (and big thanks to Melody Martin and Luis Aguilar Lopez for the help, all remaining errors are my own), which took, oh, 20 minutes total? I mostly made some dumb grammar mistakes, although they also helped greatly with colloquialisms.

Then I braced myself and opened George’s e-mail, and instead of him berating me for my lateness, there was only nice words about how much he’d liked the revision. (And one note that I’d spelled a name two different ways, which both my Spanish reviewers had caught and I’d already fixed.)

Whew. All done now. I’m still not sure why I get so anxious and often avoidant about the Wild Cards work, because once I’m actually doing it, it’s quite fun. Something else to poke at with the shrink, perhaps.

I did have specific stress about this one, because in the wake of the American Dirt controversy, I was particularly worried that I might not have done a decent job representing this guy, his culture and background, etc. But my reviewers didn’t raise any red flags, and I tried to be conscientious, so hopefully it’s okay. If not, well, I’ll take my criticism on publication and try to do better next time.

I could have avoided it all by just writing someone who looked like me — but I was writing about a bunch of contractors in the 1990s in New York, and there were not so many Sri Lankan American women doing that job back then (and probably still aren’t). Hopefully, I did Jesús (and his grandmother) justice.

“Jesús pushed himself to his feet, rubbing the last of the dirt off on his jeans, pondering the problem. “Why don’t we make you a mosaic? I can swing by Norton’s junkyard, find bright tile and glass. We’ll make a garden of flowers out of them, like your paintings.” His abuelita painted murals for the neighborhood, walls blossoming with brilliant color. You knew when you’d crossed over into Jokertown’s barrio because of her paintings – flowers and fantastical beasts. The mayor had even sent her a certificate, honoring her contribution to the community, and they’d run a piece about it in the paper. She kept stacks of those papers in her spare room….” 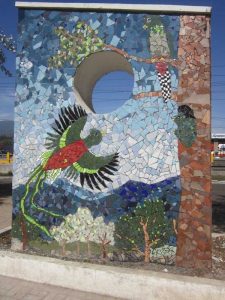