Sunday dinner this week was actually a full meal! Yay, us! We had crudité! We had bread! And it only took 15 minutes or so to prep together (aside from the ice cream) (plus baking time).

Admittedly, we bought a bag of frozen brown-and-serve rolls, so making bread was mostly a matter of sticking those on a tray and adding it to the oven ten minutes before the chicken was done, but hey, I’ll take it.

• crudité with carrots, bell pepper, ranch dip, hummus (set out in advance, so hungry people could nibble while cooking / waiting, and get some vegetables into us — Anand said, “I’m so hungry, even raw carrots taste delicious!” Yes, that is my sneaky plan, child.) 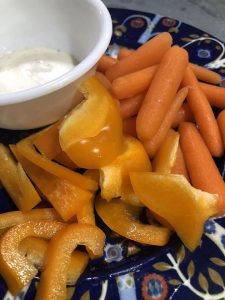 • baked chicken thighs wrapped in prosciutto and topped with mozzarella (no need for anything else in the baking dish, since the prosciutto and cheese give plenty of salt, and the chicken gives off liquids that it cooks in, making a beautifully moist result — just bake in oven @ 400 for 35 minutes). Kevin grated the mozzarella (you could use pre-grated, but Kev is picky, and if he’s willing to grate it, that’s fine with me!), and the kids helped with wrapping the chicken and sprinkling the cheese. The cheese did get a *little* browner than ideal, so you might want to cover with foil for the first half of cooking if you’re being fussy, but definitely remove it after that, so the liquids can cook off and the cheese can brown. 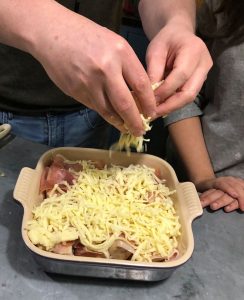 • asparagus roasted in olive oil, salt, and pepper (Kavi did most of this, with a few reminders of process along the way; I’m determined to get the kids really used to roasting vegetables before they start high school, so they can do it easily for themselves once they leave us — we prepped it along with the chicken, but waited and added it to the oven along with the bread, about 10 minutes before the chicken was due to be done) 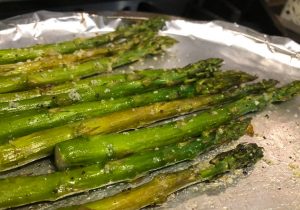 • warm, crusty rolls, served with a) olive oil & fresh grated Parmesan (for Kavi), b) olive oil & balsamic vinegar (for me and Kevin)

• two varieties of homemade ice cream (vanilla with chocolate chips / passionfruit with fresh berries, made by Anand and me the Saturday afternoon before)

(And I love that photo of Kevin’s hands working, and Kavi’s hands beside him as she watched and learned.)