[Note: Toronto visit question following at the end of this.] A highlight of the con was getting to spend a little more time with SJ Sindu, brilliant young Sri Lankan novelist, now a professor at University of Toronto, and they are lucky to have her. I loved her _Marriage of a Thousand Lies_, and you will too — just look at all the accolades it’s gotten!

I mean wow! And she’s so young too!

🙂 V. impressive, thangachi! Exciting to hear that University of Toronto is starting a Tamil Studies program too; looking forward to learning more about that. (Navaratnasingam, you may be interested!) 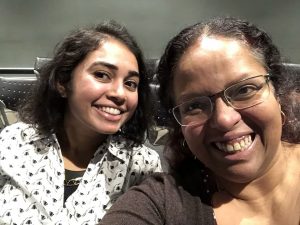 I’m really hoping we can get together in Toronto sometime in the next year — I was planning to go there at some point for book tour (esp. since I have fabulous cousins in Canada, Loudes Tania and Michele Jayakumar and Rozanne Arulanandam), so it’s mostly a matter of picking dates.

One complicating factor — I’d planned to go out this year, since the book launches in March 2020. But MLA is actually going to be in Toronto next year, so there’s an argument to be made for trying to do something in conjunction with MLA, which wouldn’t be until January 2021?

It’s tempting to say ‘do both!’ of course, but Kevin and I just had the first of a series of serious conversations of how we’re going to manage all our work travel and still be present for each other and for the kids this coming year, so just flitting off constantly on international trips, even if we can find the funds, probably isn’t the wisest move.

So here’s the question — when should I go to Toronto? Which is mostly about what other South Asian / Sri Lankan / science fiction events are happening there in the next year?

It’ll generally work much better if I can pair it with that kind of thing, so I can do joint events with other writers, helping to draw bigger crowds for all of us, and also making it more interesting and fun overall. I don’t just want to be talking about me and the cookbook all the time!

Also, are there literary venues I should be reaching out to, who might want me to do a reading there? Professors teaching classes who might want me to come as a guest? Etc. and so on. And if any of these opportunities come with a little funding help, even better, though that’s not necessarily a requirement.

Help me brainstorm, Toronto peoples? (Or those knowledgeable in the ways of literary Toronto…)