I wanted to go to two readings on Wednesday evening (about 4 hours of sitting and listening), but I also knew that ADD makes it really hard for me to even sit still for readings, much less focus and listen to what the readers are saying. I mostly don’t even try to go to readings these days because of that, which I feel quite guilty about when I’m at conventions and all my writer friends are giving readings.

I decided to try something else this time around. I had enough time before the readings to duck into a local textile arts store (Stitches), which happened to be across the street from where I’d been looking at a venue with Nora (Capitol Cider). They’re really mostly a sewing store, but they did have some yarn, hooks, and needles.

I found a nice chunky yarn, Magnum, and bought a skein of it in a blue that I thought would go nicely with the new jacket. I took a photo of the pattern on a sample scarf they had hanging next to it — although it’s barely a pattern, alternating knit and purl stitches. I mostly just wanted to remember how many they’d cast on to start, though any odd number would basically work for this. They wound it up into a ball for me, and off I went, walking to Hugo House for the reading. 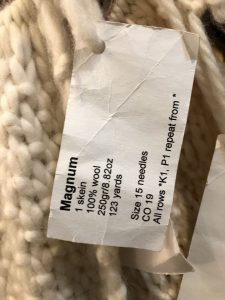 It’s a good thing I picked something so simple, because it turned out that it was super-dark in the audience for this reading! I could barely see the yarn. But that meant that I worried less about disturbing anyone else (I deliberately chose a seat far back), and there was just enough light that I could cast on and count stitches. After that, thankfully, the knitting was simple enough that I didn’t really need to see what I was doing.

And it worked! Over the hours of that reading, and the one that followed (maybe 3.5 hours of total reading time, with transit in between), I knit this much of the scarf, which was satisfying, and more important, was able to basically sit still and even listen to the readers, even though my ADD meds had worn off hours before. 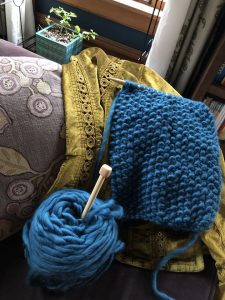 So a good hack, and one that I think I will try to continue. The SF/F world is fairly used to people knitting in the audience at conventions, for exactly this reason, but I may need to explain a bit in other venues, so people don’t take it as me being disrespectful. Honestly, I’m paying MORE attention to you when I knit.

It won’t always be possible, I’m afraid — I did try to do this once when attending an academic talk at UIC, and people were so distracted by watching my knitting that I felt that it was too disruptive, so I stopped. But maybe we can normalize this a little — I know I’m not the only person who has trouble sitting still!