Seattle got much colder than I expected, and by the end of the first day, the light raincoat I’d brought was just not cutting it. I went out to look for a heavier sweater, at least. I didn’t plan to buy a coat, I swear! I’m trying to do something of a buy-nothing January, to recover a little from all the holiday gifting, etc.

I mean, buy groceries and other essentials, yes. (Although I’m also trying to eat down the pantry and the frozen foods, with some success. I just had some frozen curry chicken bao for lunch, that I bought three months ago, and they were delicious.) But mostly, when I feel the urge to buy a book or a game or clothes or whatever non-essential item, I put it in the shopping cart and save it for later. If I still want it in February, I’ll see if we can afford it then.

But sometimes the fates just step in. The Free People store that was literally across the street from my hotel happened to have ONE of these jackets left, in EXACTLY my size, AND it was on clearance, so still pricey, but not quite as outrageous as their normal pricing. I thought, “Well, I’ll just try it on.” Mostly, I admit, sort of thinking that Ellen Kushner would appreciate this coat, which seems sort of Tremontaine-ish, and I should at least try it on and take a photo for her. 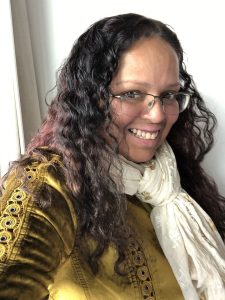 Then I fell in love. It’s a great color for me, and I don’t actually own a dashing velvet jacket, and it was actually reasonably warm, and it had good pockets.

Plus, I do budget separately for convention / performance clothes vs. regular clothes, and think of those as part of my professional expenses, even though they’re not actually tax-deductible, which seems a shame and also sexist, given how much more pressure there is on women to spend a lot of money on work clothes / make-up / etc., often with professional consequences if they don’t.

AND, while I have a goodly number of starry dresses and the like at this point, so the SF side is well represented, I am still somewhat lacking on the fantasy side. When I host a SLF Deep Dish reading, I like to look the part, and SF has been much more represented than fantasy so far. So I kind of HAD to buy this jacket, right? (I would also like a dragon dress or several. Must work on that.) 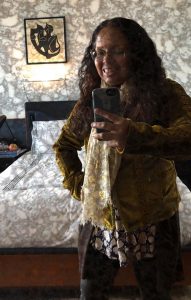 I feel like my decision was validated by the fact that a) I was much less cold when I walked out of the store, and b) no fewer than FOUR South Asian writers in the next two days complimented me on this jacket.

(I did sort of fail to take a selfie that captured the full glory of the jacket, but hopefully you get the idea.)