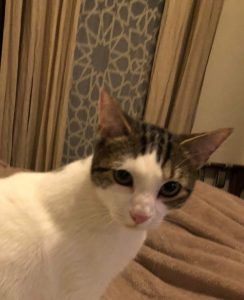 He’s in good shape, healthy and noticeably bigger than he was two months ago. We don’t know a lot about where he’s been, except that he was kept in someone’s home. Our guess is that Sripati had slipped his collar, as he is wont to do, and someone thought he was a stray and took him in. And then took two months before they took him to the vet, where the microchip was discovered, perhaps? Or just decided they didn’t want him anymore? All we know is that he was turned over to Animal Control after someone had him for two months, and then we got the call from the Animal Care League to come pick him up.

It’s going to be a little bit of a process, reacclimatizing Sri. He’s great with all the humans, but right now, he hisses and swats out at both Ellie and Arya. We’re keeping him in the guest room for the moment, which may make him a little stir-crazy, but it’ll get him used to the smells of the house again. Arya periodically comes and mews outside the door, and Sri mews back. We’ve been carrying Arya in, and the aggressiveness seems to be fading a bit with each visit, so I’m hopeful that within a few days, they’ll be back to normal again. The brothers were such snugglebutts when they first arrived. 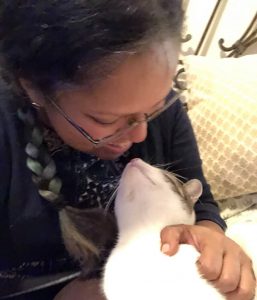 It’s possible, though, that what drove Sri away in the first place was Arya being aggressive. They had just turned about one, and apparently that kitten-to-cat transition can be a rough one in terms of territoriality. We’d heard a few squabbles between them in the days before, though hadn’t actually witnessed a fight. So maybe instead of wandering to the backyard and around a bit during the day, and back in to sleep for the night, the way he had for the six months previous, Sri decided to stay out a little longer. Or maybe someone just took him — we may never know. 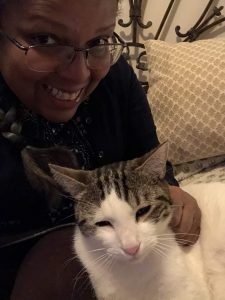 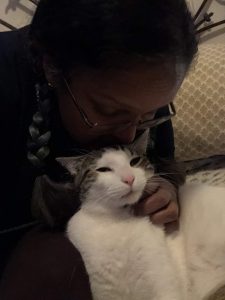