I came home from teaching thinking I’d knock out the croissant lamination, no problem. Well, first off, it turned out I hadn’t made my dough square quite large or square enough. So I took the butter square off to try again. More rolling. 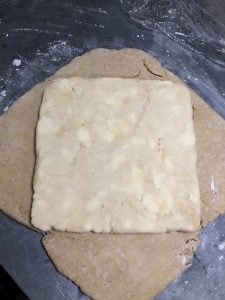 Second roll got it square enough, so I put the diamond of butter inside the square, folded over the triangles (like making an envelope), and pinched them sealed. Easy-peasy. Next — flipping it over and rolling it until it measured 10″ x 20″. I have to admit, having looked at the rest of the recipe by this point and seeing just how often it asked for measurements, I caved and went down to the basement to get a ruler. [shakes fist at the French] It took a while, and my shoulder muscles had started to ache, but I did it, finally. 10″ x 20″, achieved. 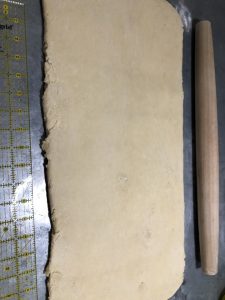 Next step, fold it over in thirds, like a business letter. No problem. Flip and turn and…roll it out to 10″ x 20″ again? Okay, I can do that. It went a little easier this time, as the dough wasn’t quite as chilled, but I feel like a wimp admitting that I was super-tired by the end of this roll. I think I still have some sort of stupid lingering cold, as I have been weirdly exhausted for much of the last week (weeks?).

I did the roll out, folded it in thirds again, wrapped it and put it back in the fridge to chill for 30 minutes, sat down on the couch to look at the recipe again. Two MORE turns and rolls? Seriously? How many layers of flaky, buttery pastry does one person need? 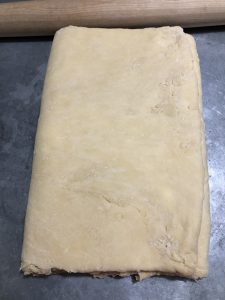 ALL. I need ALL the layers. But I acknowledged that I had hit the point of tiredness where this was starting to be no longer fun, and there is no point in this kind of nonsense unless you are also having fun, so I paused for the night. Croissant-finishing would have to wait another day. Instead, I took myself to bed with a few episodes of dumb interior design TV and called it a night.