Dear parents of the game design afterschool class, I just wanted to give you a quick update on what we’ve been doing.

In the first class, we played a role-playing game called Hero Kids. The nine students picked characters that had been pre-made for the game, and gave them names and colored them in. Then I was their game master as we talked through an encounter (pretend story) — there were giant spiders attacking the school, and the hero kids fought them off. After the attack, they voted on whether to dissect the spiders or not — luckily, the dissection went well, and they discovered vast amounts of gold and gemstones in the spiders’ bodies. There was much rejoicing. 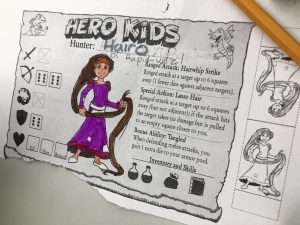 They should have come home with a six-sided die (a D6), which is theirs to keep; it’s what they roll to see how an encounter went. For example, if they roll a 4, 5, or 6, their attack succeeds. If it goes badly, then they roll again, to see if they take damage — if they roll a 1, 2, or 3, they take damage — in this game, the first time you get hit, you’re bruised, the second time, you’re hurt, and the third time, you’re knocked out. (If they have a shield, they can roll to see if their shield protected them.) We didn’t play that long, so nobody was more than bruised, and with their healing potions and the help of the healer character, everyone was back up to full strength and loaded with treasure when class ended. 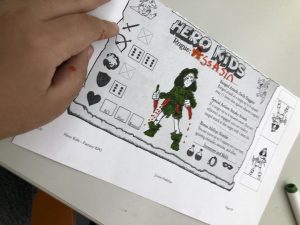 In the second class today, they broke into two groups of 4 (one child was out sick), to design their own characters and play separate games. They came up with a species (human, goddess, sea monster, etc.), and a name for their character, and some of them drew and/or colored in their characters too.

They also learned how to use a 20-sided die (a D20) to ‘roll up stats,’ which is a key part of classic Dungeons and Dragons. I made sure that they were all pretty evenly balanced — if they rolled too high or too low, I had them re-roll. They rolled for strength, health, magic, defense, speed, ranged attacks (with a bow and arrow, or other weapon you can throw), and more. In classic D&D, you’d also have characteristics like ‘charm’ — if you encounter a monster, you can try to sweet-talk them instead of fighting. We didn’t get into that today, though.

Then they took turns as game master, each one leading three kids through a little encounter. So far, the games we’re playing are very much like D&D, so there’s lots of adventuring and fighting of monsters. Role-playing games don’t have to have fighting, but at the end of a long school day, they’re full of energy, so getting to throw dice around the room and act out fight scenes (that’s called LARP-ing, live action role-playing) seems like a good way to burn off some extra energy. If you wanted to play at home, you could definitely play this outside too — you just need a place to roll the dice, and somewhere you can keep a pencil and paper, to keep track of your stats. 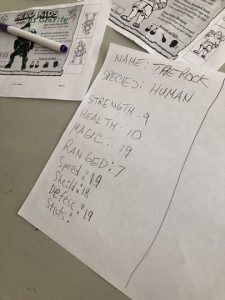 They should’ve come home with a D20 today, and next week, they’ll bring home a dice bag too. If they’ve lost their dice, tell them to let me know — I have some extra they can take home. But my hope is that with a D6 and a D20, they’ll have what they need to do more role-playing games at home — with you, or siblings / cousins, or friends. My son (also in the class) likes to do adventures with the family, where he’s the game master, and we’re playing pretend in his adventure. It’s a good way to make putting away the laundry go by a little faster! 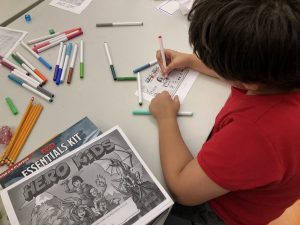 I’m including a link to some photos from the class. We’re hoping to develop this class for a future offering through BaseCamp, so I’m blogging about it (in general terms) on Facebook. If you’re okay with your kid’s photo being posted online, let me know; it’d be great to show people what this looks like. But totally fine if not, of course — I’ll assume not, unless you give explicit permission.

Next week, we’ll be working on creating a magical land, so I’ll be bringing in Legos for them to experiment with, and we’ll be drawing maps!