Every time I start writing a background piece on Sri Lanka, trying to connect the dots, I stall out, overwhelmed by just how careful I feel like I need to be, and also how, as a member of the diaspora who left long, long ago, I need to present my credentials for commenting.

• this many academic degrees (3, one of them a doctorate in post-colonial lit. and writing)

• this many great-aunts killed during the war (bombed, stabbed to death, cut into pieces) (2)

• this many grandmother’s houses, that I spent months in as a child, firebombed, so that she was forced to take refuge in a convent, part of the house destroyed completely (1)

• this many of my parents’ brothers and sisters, other close relatives, who experienced the terror and trauma of Black July, who hid for hours under Sinhalese neighbors’ beds, who fled as refugees (many)

• this many of my mother’s cousins who were killed in the North, long after the war ended, their throat slit, and we still don’t know whether that murder was war-related or something more personal… (1).

I can present those facts, and maybe I should. Maybe it matters that I’m a stakeholder in this conversation, that I have some backing behind me. Some context, so that when I start talking about Sri Lanka’s history, at least people know where I’m coming from. Context matters. It’s just…slowing me down a little, when what I want to do is give you the timeline, and walk you through it.

• “…sites that have revealed ancient human skeletal fragments are the Beli lena cave and Bellanbandi Palassa in the Ratnapura district. Carbon samples corresponding to the fragments were dated to respectively 12,000 BP for the former site and 6,500 BP for the latter, suggesting that the island may have been relatively continuously occupied during this time frame…”

It matters that Sri Lankan archeological evidence solidly supports the presence of Balangoda Man, that it establishes the Veddas as biologically linked to them, and as the earliest inhabitants of Sri Lanka, for thousands upon thousands of years.

• The Veddas: “…historical sources describe the aboriginal people of Sri Lanka—the Veddas—as hunter-gatherers, who inhabited natural caves and traded their game and honey for metal-based arrow and spear points from neighbouring village populations. These villagers were predominantly descendants of populations from the Middle East, Europe and the Indian mainland who during different periods were en route along seaways or arrived from India…”

It matters because ardent Sinhalese nationalists want to claim, and generally believe, that they were on the island ‘first’ — that ‘first’ has contributed to so much grief and pain.

Exercise for the reader: Draw connections to other parts of the world, other claims to be ‘first’ or with some other justification for a supposedly more righteous claim, and the consequences of those claims.

How we as humans allocate shared resources has to be one of the most pressing problems of the current age, with implications for race, ethnicity, religion, class, gender, environment, and more. We should be transitioning to a post-scarcity world, but there are so many obstacles in the way.

“Metrical and morphometric features of the analysable skeletal remains from the Sri Lankan caves have revealed similar anatomical attributes, signalling the likelihood of a biological continuum from the prehistoric hunter-gatherers of the island to the Veddas, and a close biological affinity over a period of roughly 16,000 years…recent genetic study has found indigenous Vedda people to probably be earliest inhabitants of Sri Lanka.”

Both Sinhalese and Tamils came to Sri Lanka about two thousand years ago. Both groups are latecomers, immigrants, invaders. What if that understanding had been more widespread during the war years, if it were more widespread now? There are still many, voters and politicians alike, using the rhetoric of ‘Sinhala First!’ to drive and justify public policy. Would it make a difference?

I don’t know. These are from notes I took in grad school, when I spent a semester studying Sri Lankan history, and I will forever be grateful to the Indian history professor who took the time to put together a focused reading list for me:

• 5th century B.C. – Indo-Aryan migrants from northern India settle on the island; the Sinhalese emerge as the most powerful of the various clans.

• There followed a long, relatively peaceful, period of multi-ethnic community in Sri Lanka…

I have no investment in yanking away any Sinhala sense of pride in homeland; Sri Lanka is majority Sinhalese, after all. And as far as I know, there is no significant Sinhalese population anywhere else in the world, and that matters too.

I do want to point out, at the same time, that Sri Lankan Tamils are really not the same as Indian Tamils, in a variety of ways — two thousand years of shared history, for one. Shared culture, shared traditions, intermarriage and friendship. Even for the strictly biological: “Vedda people’s mitochondrial sequences were found to be more related to the Sinhalese and Sri Lankan Tamils than to the Indian Tamils…”

Sri Lankan Sinhalese and Tamils are more related to each other than to anyone else on this Earth. We are kin.

More than any of the above, it matters that Sri Lanka had hundreds and hundreds of years of multi-ethnic community. Sinhalese and Tamil, Buddhist and Hindu and Christian and Muslim, side-by-side. Kings fought for power, while everyday people shared milk rice at New Year’s, rich cake at Christmas and weddings. It matters that we lived as neighbors and friends and kin for a thousand years and more.

That makes the tragedy of this past weekend, of the war years, so much more heart-breaking. 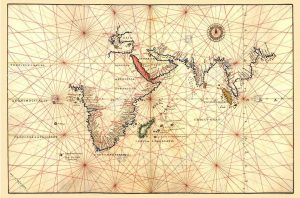 More soon, I hope. The map image is a portolan map of the Indian Ocean — it was used by sailors to navigate the ocean, showing the ports and the windrose network of navigation lines. The little yellow blob at the tip of India is Sri Lanka.