I talked to my father for a while last night; as he knows, I’ve been more involved in Sri Lanka in the last few years, as my writing has increasingly centered there. In some ways, I’m more involved than he is these days — he left as a young man of about 30, and while we went every few years when I was little, we mostly stopped after Black July.

I was supposed to go back in summer of ’83 on my own to visit my grandparents, but they cancelled my flight when they got a telegram saying trouble was coming. My grandmother’s house was fire-bombed, I think that year, and she took refuge in a nearby convent. During Black July, thousands of Tamils were massacred in the capital city, and many of my relatives fled as refugees. (My SF novella, _The Stars Change_ is in many ways a translation of those events.)

I think my father hasn’t been back since 1995, when we all went for my uncle’s wedding? Even then, we stayed in the capital city, at the big hotels that catered to tourists, that seemed safer; most of us didn’t go to the north, where the conflict raged.

I don’t want to speak for him too much, but I think it’s fair to say that his connection to Sri Lanka was in some ways a casualty of the war — he felt it was dangerous to travel there for a Tamil after the events of Black July, and he grieved for what had happened to his country. Even watching the news was painful.

I went in 2005 with Karina, during the cease-fire, then again in 2018, with Karina, Kavya, and Jed. I would’ve gone more often, but first there was the war, and then small children, leading to lack of budget and lack of time. I have a little more time now.

Kev and I have been talking about trying to go more regularly, with the whole family, so the children feel a real connection to their heritage. In America, it is so easy to lose track of that, swallowed up in the great melting pot, but I do think something is lost there. I tried to set up a semester in Sri Lanka at one point, with plans to take the kids out of school and enroll them in an international school in Colombo, but that ran aground on department logistics.

But I took Kavi for the first time last December, and my plan was to try hard to start going more regularly, maybe once every 2-3 years. Attend the Galle Literary Fest perhaps — I was eight months pregnant with Kavi the year they invited me to be a guest, so couldn’t fly. Build more bridges with local writers, strengthening the Sri Lankan homeland – diaspora literary conversation.

I have loved reading speculative fiction books from Mandy Jayatissa, Yudhanjaya Wijeratne, Navin Weeraratne in the last few months — there is a new flowering of speculative Sri Lankan literature, and it is so exciting. SF folks should read Navin’s _Zeelam_, for a vision of zombies in Colombo (with the remnants of war hovering in the background). You should read Yudhanjaya’s new Commonwealth Empire series, starting with _The Inhuman Race_ — a post-apocalyptic Sri Lanka, in a universe where the British never lost control of their empire.

In the last few months, Yudha and I have been working on building that connection, creating a South Asian SFF Facebook group, encouraging people to read each others’ work. I’ve loved introducing them to Naru Sundarand R.K. Kalaw, and vice versa. Yudha will be here in just a few weeks, to read at Deep Dish in Chicago, and then he and I will be at the Nebulas in L.A., where he’ll be the first Sri Lankan nominated for that award. This — this is what I want. Free movement, enthusiastic exchange of ideas and cultural support.

(Anu Mahadev, all of this is making me think — maybe Jaggery could do a spotlight issue on Sri Lanka sometime this year, highlighting some of the writers there? Let me know what you think of that.)

I don’t know what these attacks will do to tourism, which is a significant economic support of the island — there have already been some real financial problems there recently, with a government that has incurred massive debt (such as with the loan of Chinese money to build Hambantota Port, a loan they struggled to repay). Chinese investors are pouring billions of dollars into Sri Lankan infrastructure and developments, but many local citizens feel the country is being sold to the Chinese. Tourism dollars would be better revenue sources, leading to a more stable economy and better opportunities for the locals.

Friday morning, I actually met with the study abroad office, to see whether offering a UIC-led study abroad program might be feasible; that would let me teach a 3 or 6-week class there, and then stay longer if I wanted. The answer is possibly, though it’s a little unclear if students would be interested in taking a for-credit writing workshop in Sri Lanka. (Surprisingly, it wouldn’t cost that more than summer tuition here, so perhaps.) The next step would be talking to AISLS (the American Institute of Sri Lankan Studies) to see if they could be an institutional partner for UIC. Given events, I’m going to wait a little while to follow up with that. But not too long. 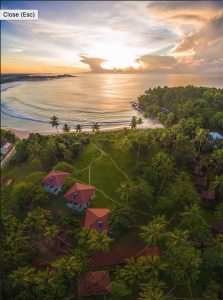 I’ve been talking separately with Suchetha and Mandy about offering a writing retreat there in the summer of 2020 — it wouldn’t be cheap, given the cost of airfare + cost of food and housing, but it would be beautiful; I would love to teach a little writing and show people my country and feed you all the delicious food. We’d get up, do yoga, talk about writing over egg hoppers, do a writing exercise or two, have lunch out and an excursion, then a nap, more writing talk over dinner, a little beach time in the evening, with arrack sundowners and crab curry… I had talked to Sugi Ganeshananthan and Nayomi Munaweera as well, thinking that we could all go, perhaps offer a sequence of such retreats.

Somewhere around $2200 + airfare for ten days, to cover room, breakfast and dinner, a driver and a van and plenty of water battles for excursions, visits to a turtle hatchery, a Madu River safari, entrance to the Temple of the Tooth, etc, plus a little teaching. Pay honorariums to local writers to come and speak / teach. We’ve even built in a little money to offer one scholarship to a writer of South Asian descent, to help them get back home.

It would cost notably less if people were willing to share bedrooms. I wasn’t sure if anyone would be interested at that price, but I’d planned to write it all up and offer, with the hope of taking folks in 2020. Maybe a food tour too? Or combine them? Writing + food = best. (Maybe I can talk Roshani Anandappa into coming along and helping with the food tour bit.) I wasn’t sure which people would be most interested in, but I figured I could use Facebook to do research.

Now I wonder — will people be scared to go? I saw photos of the Sri Lanka airport last night, with the departure lounge jam-packed with tourists. The streets under curfew are shockingly empty, where normally they’d be filled with cars and tuk-tuks and bicyclists. Yet at the same time, my dad said that as soon as the schools were reopened, he expected people would be back to school, back to work. They lived through the war, after all, and for most people, life didn’t just stop.

I know he’ll worry if I go back, if I take the children. Well, it won’t be soon in any case. We can hope that this was a single isolated attack, that they’ll identify the perpetrators quickly, and cut off any chance of them acting this way again. In the meantime, I’ll keep researching these trips, making plans to return as soon as I can. 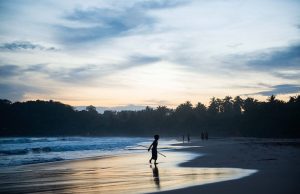 This is Talalla Retreat, beachside in Talalla, one of the places we’re considering for the writing retreat. I haven’t been, but my friends there tell me it is private, serene.