(originally posted as three separate FB posts, but y’all get it all at once….)

So, I’ve been in this weird mental space the last year where I feel like I’m constantly generating ideas (some of them backed up from the years of small children and cancer), and then I can’t figure out what to work on, and they all seem equally important and full of glorious potential, and so I jump from thing to thing feeling constantly anxious that I’m forgetting things.

It’s been terrible, actually. Why am I having this problem now, after 25+ years as a writer? In part it’s cancer, in part being mid-career and middle-aged, in part who knows? Less important than diagnosing why, I think, is figuring out how to handle it.

Step one in handling it was making a huge master list of works-in-progress. I kept forgetting things on that, and having to go back and add them, but after a few weeks, I finally mostly had that down. (Then I came up with two more book ideas last week, but it’s fine, I’ve added them now.) The list is below, and compiling it was important, but in and of itself, it didn’t really do much to alleviate the feelings of panic and dizzy-mindedness. See next post for a possible solution.

(Note: feel free not to read the list below — my therapist told me today that just reading it made her feel stressed.)

Nonfiction:
• A Feast of Serendib (redo titles)
• Domestic Resistance: take some of the better food and gardening posts over the first year Trump was in office (well, really, starting with the night of the election), and put them together, collage-style, in a book with both the general political posts, the running for office posts, and possibly some news clippings to make the timeline clear. Domesticity as therapy, sort of.
• Make Beautiful
• Arbitrary Passions / Good
– cancer journals as book
– Writing Your Identity
– two Library Journal columns

– Four Nights and One Morning
– Elizabeth
– Mark Me
– Enthusiastic

Other:
– Board or Video game: Sigiriya
– Serial Box: Sigiriya

Now we talk about the kanban board. I hadn’t heard of such a thing, which was apparently developed at Toyota, but when Benjamin arrived for WisCon and heard me wittering on about how I had too many projects and couldn’t seem to settle down to any of them, aigh!, he marched me up to my office, had me pin a piece of poster board to the wall and find some sticky notes, and then we built a kanban board.

First step, figure out what the various stages are. After some discussion, we came up with the following for me: 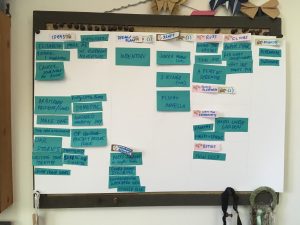 The key thing here is that only one thing should be actively written (drafting) at a time, and we decided dreaming / planing should be restricted to 1 thing too, and ideally the same project as drafting, though I’m not there quite yet. Everything else has to go into one of the other categories.

This is easier said than done. I am on deadline for two Wild Cards stories right now, so those have to be in drafting, and I’d been in the midst of revising a novel to novella, so that made sense to be in drafting too. We put them all there for now, but I actually spent an hour this morning on one of the WC stories, got it to a point where I’m now waiting for responses from collaborators, and so I got to move it out of drafting, which felt VERY satisfying. By the end of next week, I should have the other WC story drafted, and then I can just have one thing in drafting and that will feel good. 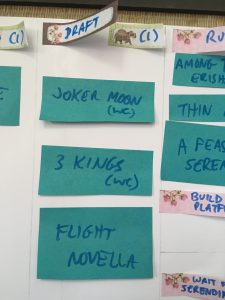 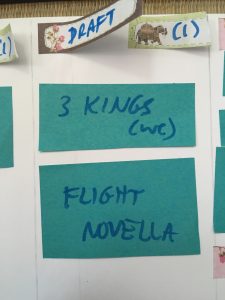 The idea here is that I’ll spend my dedicated writing time on the thing, the one thing that I’m committing to right now, and that’ll mean I don’t have to make decisions every morning (decision-making invites intense procrastination), and also that my thoughts will be focused down instead of scattered among projects.

Ben did try to get me to ‘retire’ more projects, even going so far as to suggest that I print and bind the drafts and put them on my shelf, to get them out of the way. My therapist also suggested more retiring of projects, possibly accompanied by mourning them. Accept that they failed, that I’ve learned from the failure, and move on. I’m not quite there yet with most of these, but one of my tasks for the next week is to look seriously at everything on the board and see if any more of them should be retired.

It’s funny — I’m actually super-great at winnowing in my own home, my closet, etc. I *love* giving away things to someone who might make better use of them. But I am totally ROTTEN at giving up on ideas. (Or on people, actually — there are reasons I am poly.)

Each little idea is just brimming with potential, each one could be THE ONE, and so how can I close the door on it forever? Well, the idea of the kanban board is that it’s just fine for lots of things to sit in the ‘ideas’ category, or whatever you want to call it — they’re just not going to be active right now. If I get stuck on the current ‘drafting’ book, I can always move it to ideas and move something else into drafting — that’s the beauty of sticky notes.

The key, or so both Ben and my therapist tell me, and I am sure they are wise and full of knowledge on this subject, is to just stick to one thing at a time, because when I think I’m working on many things I’m really mostly working on nothing.

(Ben wrote all the little post-its for me, which is the action of a true friend. It’s like when I was learning to juggle, and Alex Gurevich picked up the balls I dropped and handed them back to me. Sometimes, a little help with the overwhelming task is exactly what you need to get over the hump.)

(Also, my board is covered in elephants and flowers, which makes me happy when I look at it.)

This one is quick, and not anything new, but sort of new for me — I talked Margaret into being my accountability partner for a week. If it goes well, we’ll keep doing it.

The idea is that @ 10 a.m. each day, we’ll text each other what we’ve done, writing-wise. We’ve both set weekday reminders in our calendars for it.

That’s basically it, but I am hopeful that it will help me avoid what often happens on my ‘free’ days, which is that I start the day with the best intentions to write, but then I avoid it, doing everything else (there is a reason I do so much cooking and gardening), getting more and more tense and stressed and cranky as the day goes on, until finally, I force myself to actually open the file and start writing, often only an hour or so before bedtime.

Report back from day one — well, I still took an hour or two longer to settle down than I’d ideally like to, but like any other new discipline, the beginning is hard. Hopefully I will build new habits quickly over the next week. Her cheery text was certainly an incentive to actually get to work. We’ll see!

I do think having one partner for this is better than a group, for me, anyway, because the sense of needing-to-account-to-someone is much stronger this way. It got diffused when I tried doing this with a group.

As an example, this is what I sent her today:

“I’ve gotten a very slow start — did 15 minutes of writing organizing, 10 minutes of e-mail work on a collaborative story. Still kind of exhausted from WisCon, but getting there. Will ping when I’ve done more, have therapy appt. @ 1.”

“Okay, have finished off reading e-mails re: Joker Moon story for Wild Cards, responded to George, made notes for revision, moved into folder ‘hold for George’s response’. So that’s one thing done, at least. Next in queue, start drafting “Three Kings” story for Wild Cards. May not get to today, but that’s okay; this was good progress, if only an hour of work.”