I was upset to discover that we had closet moths a few months ago, and that they had eaten holes in my absolute favorite sweater (plus a few others). Argh. I could have tried to do an invisible mend, with matching grey thread, but the sweater has a fine weave, and one of the holes was quite large — I didn’t think I had the skill to repair it invisibly. 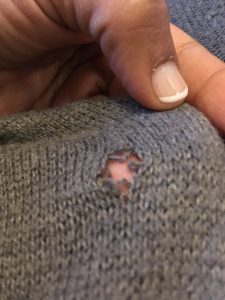 Instead, I decided to experiment a little. Several months back, I’d picked up a book, Kazuko Aoki’s _The Embroidered Garden_, and I’d been itching to try embroidering some little flowers. This seemed like the perfect piece to experiment on. 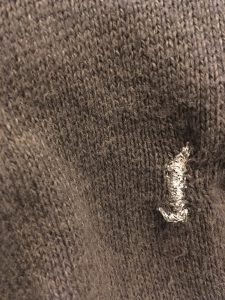 Now, I am basically a complete beginner with embroidery. I took one basic hour-long class at one point, where they ran us through the simpler stitches: running stitch, outline stitch, back stich, satin stitch, chain stitch, split stitch (which is my favorite, for some unknown reason). We also did French knots, which are useful, but finicky. The class was years ago, though — I had no idea where my embroidery hoop even was. 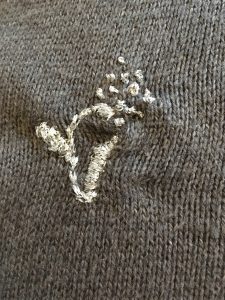 I should have hunted it up before starting, because as I was working, the fabric did pull in sub-optimal ways, and I started to get really worried that it was going to look terrible when done. Also, I was impatient, and had decided to work with several strands of thread, to do the filling faster, which is effective, but gives you a lot less fine control, making for a slightly messy result. Anyone who really does embroidery should feel free to scold me for my laziness there. I’m not sure I really have the patience for embroidery as an art form — crochet is much more forgiving for hiding errors. 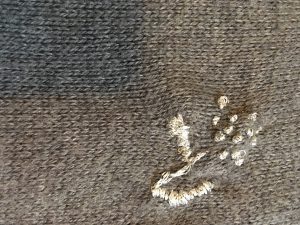 But in the end, I’m still happy with the result. The two holes are mended (while I was watching a couple episodes of Chopped), and the final result has a sparkly whimsy to it that I quite like. My daughter loves it (but anything sparkly has a big edge with her). I’ll block it a little (misting with water and then patting down the threads with a q-tip, to smooth the fibers), which should help. Now, the flowers aren’t exactly where I would have chosen to place them, but it’s not terrible, I think. I may, at some point, go back in and add more flowers or vines — but I’m going to live with it for a while first, see if I really want them. 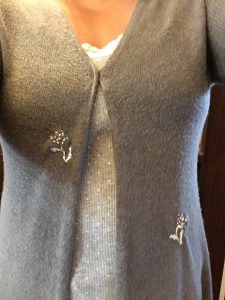 Besides, I have a few more sweaters to mend first…