I was there bright and early at Village Hall, ready to file my candidacy statement and attached petition. 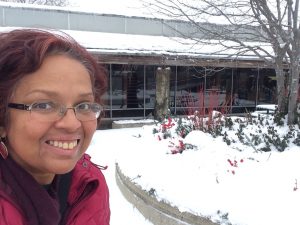 The ‘attached’ is important — it’s a requirement that the pages be bound together in some way, which I had missed; luckily, Matt was kind enough to donate an extra binder clip. There are so many little fiddly details to this process! It is pretty essential to have someone walk you through them, I think. Later this week I’ll need to go downtown and file a Statement of Economic Interests, and then bring a receipt for that back to Village Hall. 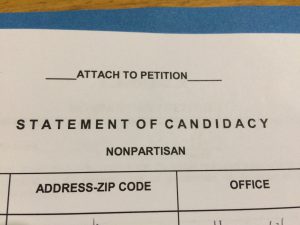 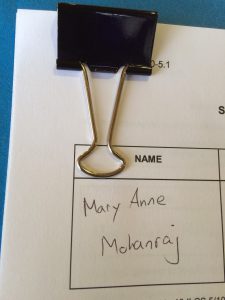 This morning’s part took about an hour, which was mostly waiting and chatting with the other candidates for library board, village trustee, etc., very pleasant and collegial. Everyone who was there by 8:30 was considered a ‘simultaneous’ filer — we’ll be put in a lottery at the end of the week to see whose names go first on the ballot. (There’s also some value to being last on the ballot, so they’ll do the same for anyone who files in the last hour of candidacy. Fascinating.) The village staff was pleasant and efficient; I don’t think they could have done the work any faster. Still, I couldn’t help thinking about the years when I was temping, at jobs with no flexibility, when taking the time out for an hour of political activity on a Monday morning would have been prohibitively difficult. There are so many barriers in the way.

But for now, here I am, definitively on the ballot! I may have persuaded my fellow library board candidates into a photo op, because I am just that excited about the whole thing. Left to right, we have Matt Fruth, Sarah Glavin, Brandon Spurlock, and Mary Anne Mohanraj. (That’s me.

🙂 ) At the moment, there are four open slots, and four of us running, but we won’t know for a week whether anyone else might be joining the race for library board. So I’m planning to file my statement of economic interests, and then relax for a week, see what happens. Once I know whether this is or isn’t an uncontested race, I’ll start actually planning the campaign. 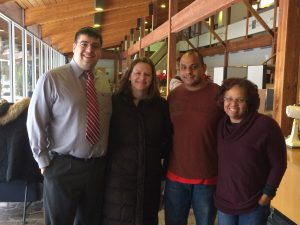 Thanks again to everyone who’s helped thus far — the advice-givers and petition-signers. It’s a fascinating process, and relatively painless and even fun so far. Onwards!