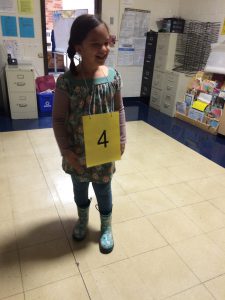 Tonight, Kavya competed in the 3rd grade spelling bee, after winning her class. I was a little on edge heading into it, but thought I’d calmed down by the time we actually got there. The kids were super-cute beforehand, quizzing each other in the lunchroom, laughing and joking and saying good luck! But boy — when she actually got up there, and got her first word (“tomatoes”), my stomach completely flipped. I have never watched my child compete in anything before, and it was totally nerve-wracking! 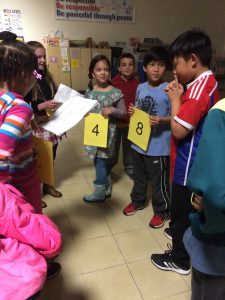 She made it through the first round, and the second (“guardian”), and the third (“sequence”), but came to grief on the fourth round. The word was “nonsense,” and she lost in what I think is the most frustrating way — she starting spelling: n-o-n-s-e-n-c….and then, before she even got the whole c out, she caught herself, and stopped, knowing it was wrong. Everyone could see it on her face. But she realized that it was too late to do anything about it, so she finished with the e, and waited for judgement. And she was out. 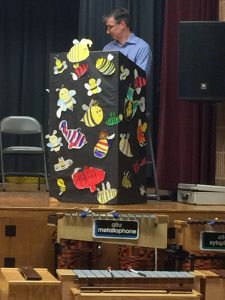 POOR MUNCHKIN!
They gave her a certificate and a lollipop and she got to come and sit with us, and I hugged her and I could tell that she was really upset, but we couldn’t talk without disturbing the remaining spellers. Luckily, I had my phone with me, so I could silently write her messages on it, so I asked her if she was okay, and she said, yes, but she felt sick. I asked if she wanted to leave, and she said she wasn’t sure, and I said we might try staying, if that was okay, and she said yes.
So we stayed, and it was a while before anyone else went out (she was the first, which made it harder, of course), but finally they started going. When they ran out of words on the study list and switched to the unpublished list, the third graders started dropping like flies. Kavi was pleased that she knew some of the words that others went out on (“bacteria”), but also relieved that she didn’t know others (“tongue”), because that meant even if she hadn’t made a mistake, she would have gone out anyway. 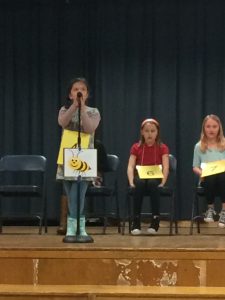 Afterwards, everyone was very sweet to her — her best friend, Ishani, had been the alternate for the class, and came to the bee just to cheer Kavi on, which was incredibly nice. She was the one who actually got Kavi laughing again, before we even left the school. And then we stopped at the grocery store, and picked up celebratory desserts, and we told them how proud we were of both of them for behaving so well (Anand managed to stay quiet through the whole thing — he had his Kindle and was playing a game, but the impressive thing was that even though exciting things were happening in the game, he managed to keep his mouth shut). And now, to bed.
Oof. Spelling bees. Not for the faint of heart! 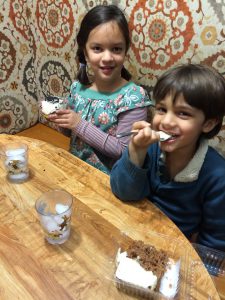