Skip to content
She's a little tired in the morning, poor munchkin, when we're heading off to school; the only thing I don't like in this photo are the lines under her eyes. But she managed a smile for me. Kavi on our new path, early one morning. It's very nice to be walking on level pavers, instead of a bunch of rotted boards in a sinking mudpit. 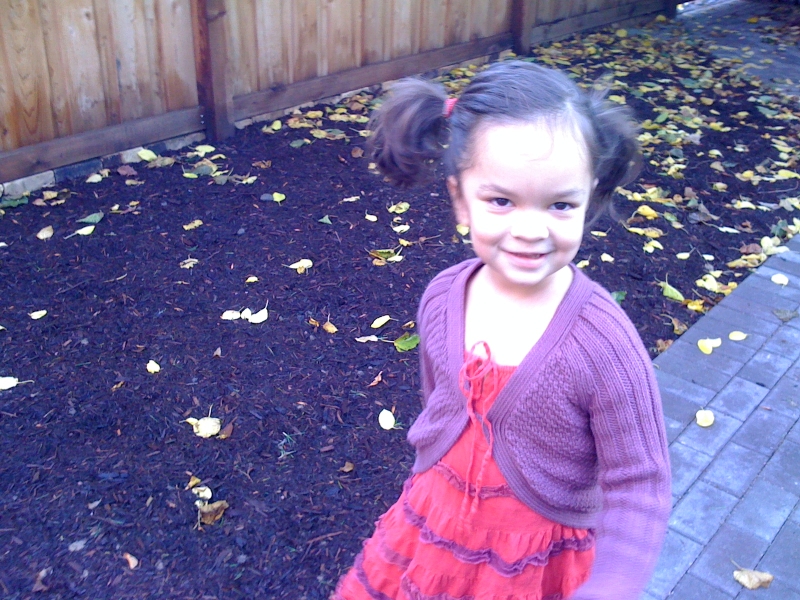 The yard is finally in, and you should have seen how ecstatic the dog was -- she'd fling herself down in the grass, roll around like mad, race across to the mulch, fling herself down, roll some more. It was hilarious.

A long process -- first we had the TruGreen people come and spray the weeds (and I know, I know, poison, water runoff, etc., but most of the 40x50 yard was covered in weeds taller than me, and it just wasn't feasible for us to yank them all out. Sorry. We're going to try to garden organically and without poison as much as possible going forward). Then the landscapers pulled out the shriveled remains. They spent an entire day bringing in and dumping and raking soil, to repair where the yard had been compacted by all the construction machinery. a LOT of soil. Then they laid the path, pavers in a running bond pattern, which was more complicated to do than I'd realized. And some steppers from the parking pad where guests will park. Finally they covered some parts with sod, some with mulch, and some they just cleaned up and left alone -- the beds next to the house where we plan to put in flowers and vegetables next spring. We'll mulch those after they're planted, but if we mulched now, it'd just mean raking away the mulch before planting.

I'm very happy with the result. It's been a long time coming! 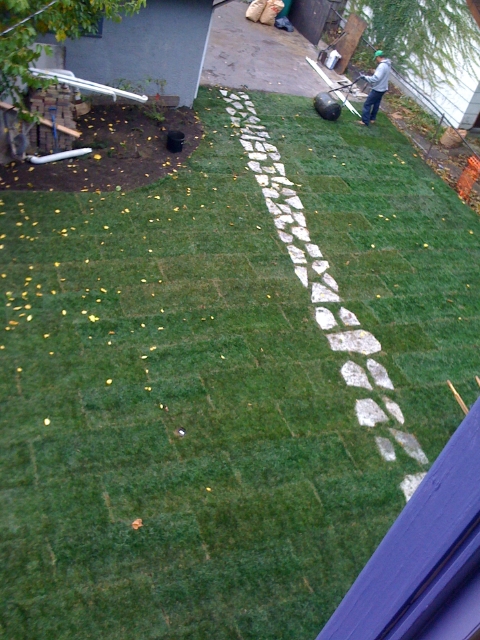 One of the contractors rolling the new sod. I like how you can see the pattern of rectangles when it's new -- sort of looks like a chessboard or something. That's mostly disappeared now, less than a week later. 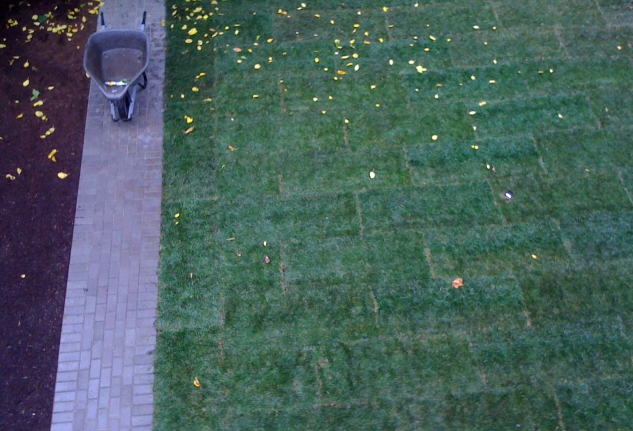 I just thought this was a pretty composition. Mulch, path with wheelbarrow, grass. 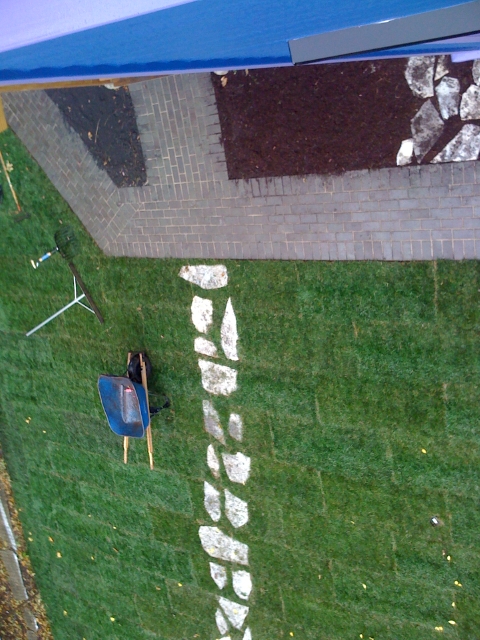 This one's a little odd and hard to make out exactly what's going on. But that's the path wrapping around from the south side of the house, stopping at the steps up to the deck and intersecting with the steppers from the parking pad, then continuing on to the mudroom door. All the bits that are brown should be covered in flowers and veggies -- as soon as I can afford to plant some. :-) You can see the difference between the dirt and the mulch in this photo -- the mulch is definitely neater in appearance, but as noted above, the dirt will be easier to dig. I've put in a few tiny bulbs in the dirt (guinea hen, wood hyacinth, Siberian squill). A promise of what's to come. The landscapers had some extra steppers, so they laid them in that bed, leading to the swing-in porch bit that leads to storage under the porch. Useful! That'll help remind me not to plant in front of the door, and be easier to walk on than dirt. 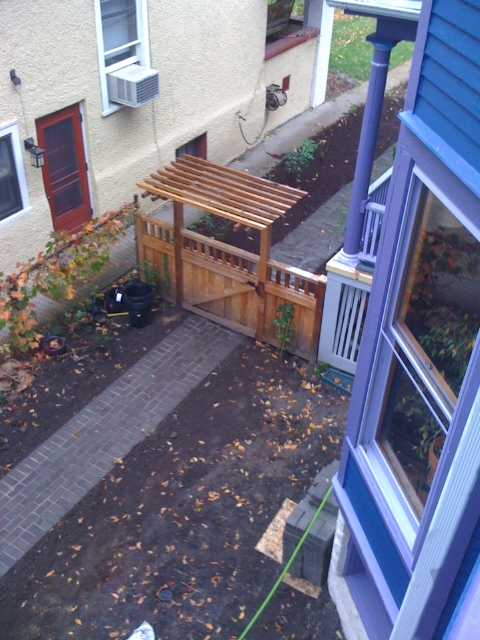 Here you can see where the fancier flagstone-like front path intersects at the gate with the brick-like pavers. (It's all actually concrete, I think, not real stone or brick. Much cheaper.) It would have cost notably more to keep using the flagstone-style pieces through the backyard, and I kind of like the transition from a more formal front yard to a more casual and intimate backyard. It's very Victorian in approach. Our front yard has a neat little trio of boxwood; our backyard will have chaotic riots of edible plants and flowers. Like that.

This is the main area for vegetable gardening, leading back from the gate, on the south side of the house. I hope so, anyway. There's on tree shading part of it, but I think it's still going to get a lot of sun. Just south of the bottom of this pic (south of the living room) is where we'd originally hoped to have the conservatory, before we ran out of money. I want to make good use of that space for vegetables, at least. Cross your fingers that it works for us! We now have three different stacks of pavers and fireplace bricks in our yard, that I'm hoping to make into vegetable beds in the spring. Should be interesting! 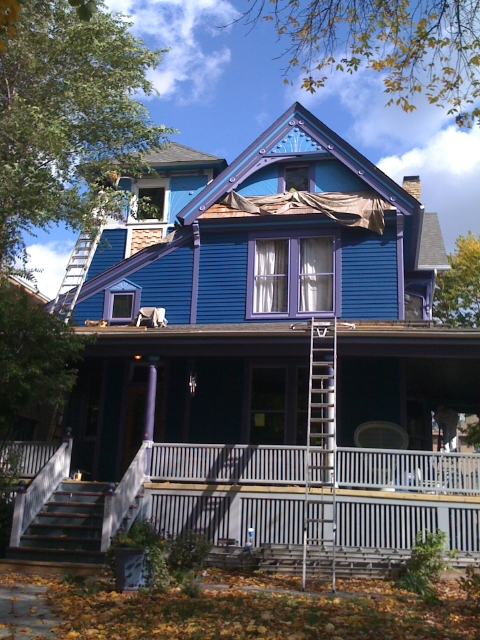 And a hint of what's to come -- the painters are finishing up the house this week. Next week, fully-painted house pics!