Skip to content
Kirsten requested floor plans, so here you go. The addition on the back makes the plans too big for our scanner, so I've kludged it together a bit. It doesn't line up vertically, but hopefully it's clear. It's very exciting, having actual plans made by a real architect, but it's also surprising how frustrating the space-planning process is -- we've gone through at least six different first floor plans in the last week, for example. Luckily, our architect is very patient about drawing a variety of different plans; I'm just going to show you the latest one David brought us.

a) original first floor - problems: kitchen too small, no eat-in area, unnecessary full bath, back stairway to basement made it difficult to make rooms bigger, no mudroom meant climbing up icy deck stairs in winter to bring in groceries and children (dangerous); back rooms, esp. on north (near condo) low on light

b) revised first floor - addition (with tons of new windows and light) off back with mudroom at ground level; interior stairs to basement and first floor kitchen; moved kitchen and knocked down some walls to make it larger, expanded family room in old kitchen space (eating up old stair space), which opens to the kitchen in a more open floor plan than you'd normally find in a Victorian, removed full bath and added powder room, added small pantry / utility closet; took out closet at front of house to punch through hall from front to back; small eat-in area with banquette and table, butler's pantry. Note: 'living room' in front is actually MA's study. 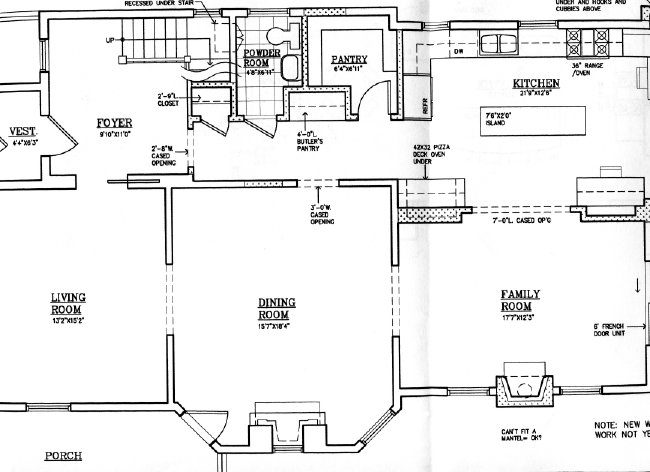 Current problems with this plan: We've since switched out the bit where a pizza oven and a desk are sketched in for 1 ft deep pantry cabinets, plus the actual pantry will probably shrink some and give us a bit larger powder room and possibly longer butler's pantry.

We're having trouble laying out the rest of the kitchen in a way that makes us happy. Trouble also figuring out if there's a way to fit in a pizza oven in the kitchen, which Kevin would like (but might be too expensive). This version also has too large an eat-in area, in my opinion; I don't want to seat the whole family there, just have a place for the kids to have their cereal or a guest to have a cup of tea; we plan to actually use our dining room for meals. I hate it when there's a big eat-in area and it ends up being the default, and no one actually uses the dining room; my folks and Kevin's both have a formal dining room that they hardly ever use, and it really feels wasteful of space. So the revised plan is to just do a small built-in banquette, with a cafe table or too (see peninsula plan below).

Alternate kitchen design, sketched out by us at 4 a.m., wondering if we really need an island, or if a peninsula is enough: 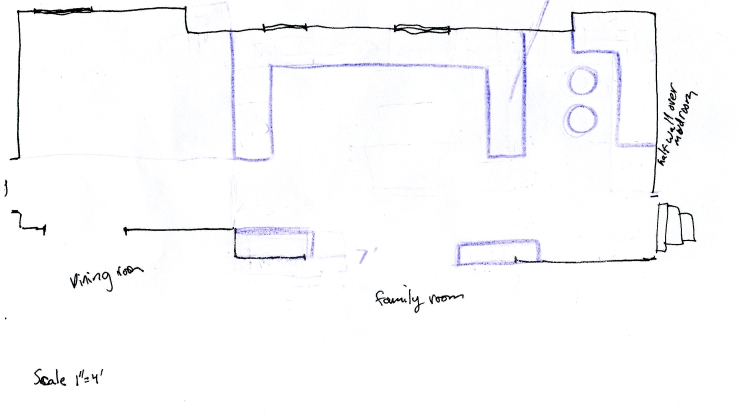 c) original second floor - problems: the staircase to the third floor runs through one of the bedrooms; there's also an exterior staircase directly to outside which we don't need or want; that bedroom also got chopped up into unusable form with a small laundry and a closet -- at some point, the owners must have been renting part of the house out and made these additions with that in mind. Also, the room just north of what they call the master has terrible headroom; very sloping ceiling, making it unusable for anything other than a closet. 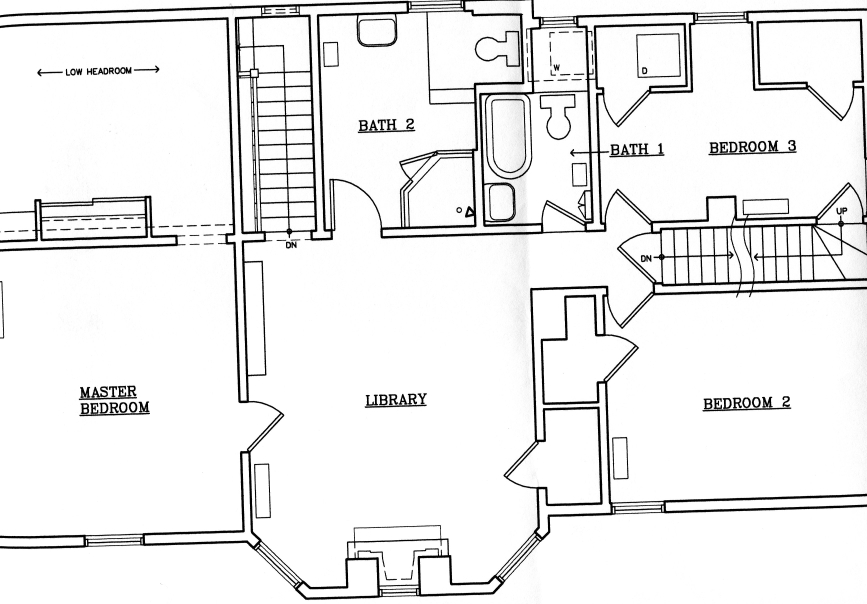 d) revised second floor - we've added a second story addition and moved the master bedroom to the back, giving it a new room with a ton of light through the new windows; it's part of a master suite, with bath and closet. We've expanded the laundry into a real room (I'm very excited about not having to go down to the basement to do laundry). The old master has turned into Kevin's study, and we're hoping to add a turret to the room with low headroom, to make a small, cozy library nook with pretty stained glass and book-lined walls. It'll just be 8'x8', but I think that's big enough for lots of books and a few chairs or maybe bench seating or both? The guest bedroom now has its own bath (which will also be the general hall bath for this floor). And the staircase has moved to the large open area in the center, which is current labelled 'library', but is really likely to be more of a family game and hangout room, I think, since it doesn't actually have a lot of wall space for bookshelves. We'll put a big table in the center, I think, and some comfy chairs to pull up to it for puzzles, board games, chess, etc. 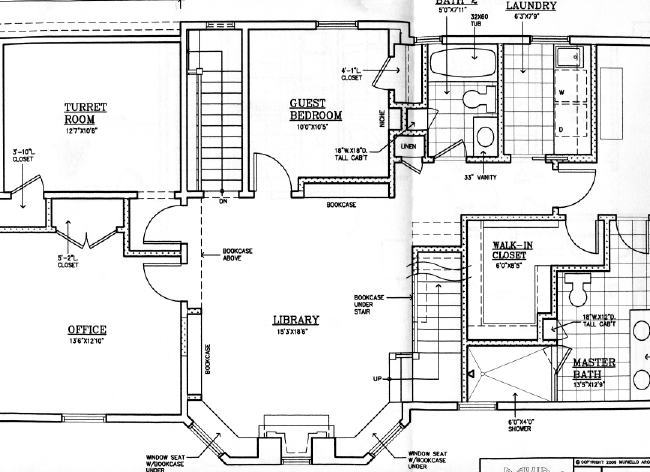 Current problems with this plan: David needs to tweak it a bit to fit in a master bath and make the windows work, etc. Shift a few walls here and there a foot or so. And we're not certain that they're going to allow the turret; the historical society generally doesn't like allowing changes to the front facade of the house, but we've heard that adding turrets is supposed to be approved. We won't know for certain until the December 23rd meeting, so we'll find out if it's allowed then.

The turret is also in some sense a completely extraneous bonus room, so if the budget gets too tight, it may have to be cut. Here's a question for you -- if you had to cut either a book nook turret, or a glassed-in conservatory (with lots of plants, a little cafe table and chairs for tea, maybe a small desk and a comfy chair), which would you keep, and why? What would children prefer? (We're not sure at this point whether heating the conservatory will be feasible, so it may not be so available for about four months out of the year.)

e) original third floor - problems: ceiling is basically too low to be at all useful for anything other than storage or maybe a lounge area; you can only stand upright along the center spines 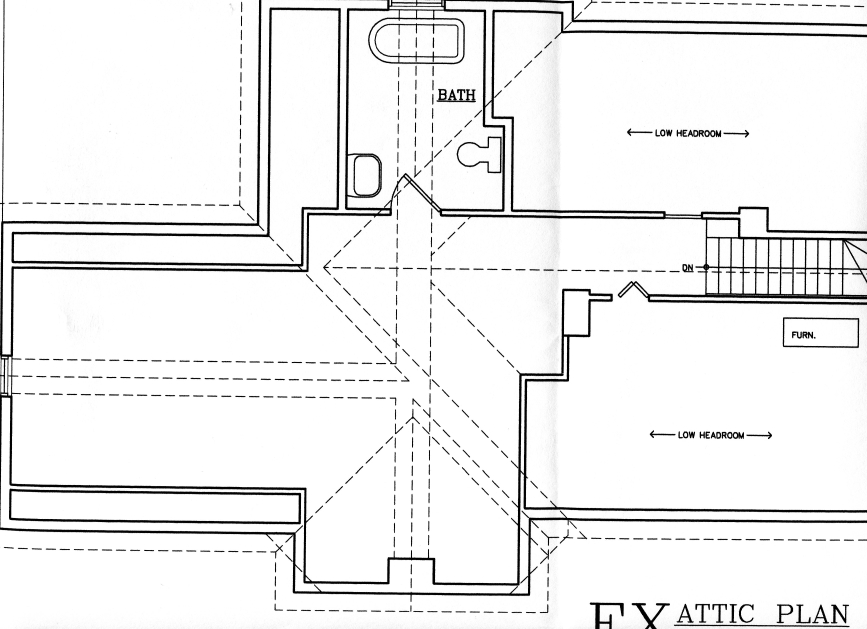 f) revised third floor - we're hoping to raise the back third of the house eight feet and build out two rooms there (they'll each have slanted ceilings, but the lowest point of the ceiling will be 8 ft. So that we can easily fit beds in there for the children's rooms, even Kavi's canopy bed. The bathroom remains as is, and the large open area becomes a common space; a playroom for now, a lounge and study area later. 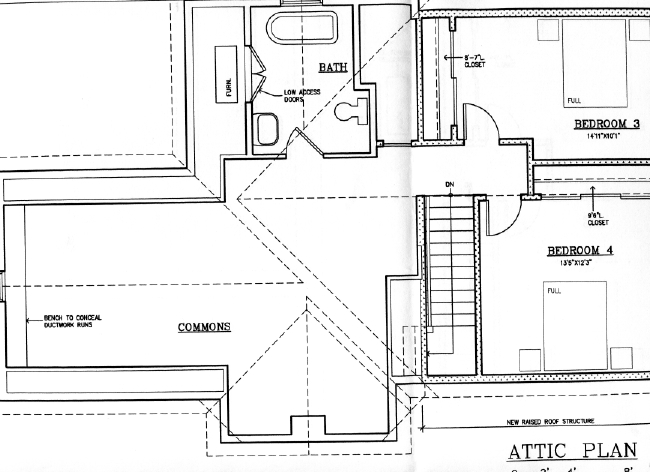 Current problems with this plan: I think this floor basically works, but we won't know until the 12/23 meeting whether we'll be given permission for raising the ridgeline. You could argue that even though it's far back, if you stand in the right place in the street, you'll be able to see the difference in the house's appearance. We'll see what they say.