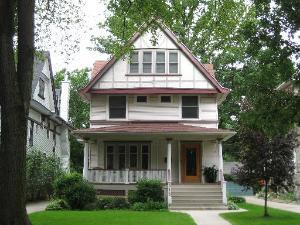 So we've apparently (fingers crossed) come to an agreement on a house at 315 N. Grove. Paying more for a house than we'd originally planned to, but quite a bit less than the sellers were asking, so probably reasonably fair all around. The interior of the house is notably prettier than it looks in the photos. Also, I plan to add some stained glass. :-) Some of the things we like about the house:

I admit to being a little wistful about not finding the perfect Victorian with a turret, but it's just become clear that the Oak Park Victorians that are as big as we'd like, and in good condition, are simply out of our price range. Ah well. We thought seriously about buying one of the more battered/small ones cheaply, and doing a major renovation/addition -- it was a tempting thought, but with the new baby coming and all, I don't think we'd have the energy to deal with that for years. And even when we did, it would be such a major undertaking, just thinking about it made me cry. Ten years ago, or even five, maybe that would have been a fun project, but at this stage in our lives, not so much.

The Grove house is a really livable house, and if all goes well in the next few weeks, I think we'll be really happy here.

I am somewhat tempted to repaint the front exterior at some point. E.E. Roberts was a pretty well-known architect of his time (one of Frank Lloyd Wright's rivals in Oak Park, although not nearly as talented or famous :-), and I'm normally all in favor of maintaining the history of the house. But I'm just not a big fan of the Mock Tudor or Tudorbethan look. (Gods, Tudorbethan's even an ugly word -- Tudor Revival is somewhat more dignified at least.) Yes, it's hobbity, I admit, and I do love hobbits, but perhaps it's a bit much in a house? Much as I adore Merrie Olde England, if it's not the real thing, I don't know that there's so much point in a rustic cottage look. Especially since the shape of the house isn't even Tudor, I think -- the interior rooms are fairly open and airy, rather than low and musty.

Would you consider it a travesty if I painted over those those fake half-timbers on the front facade? I don't think they're even wood -- just paint! Although I won't swear to that yet. Would the neighbors get mad?

2 thoughts on “So we’ve apparently…”