Skip to content
Kevin and I were talking late last night (sometimes we get to talking about everything and nothing and bedtime passes and somehow it's two a.m. and I ought really to have gone to sleep hours ago, but it's just so nice talking to him that it takes a real act of willpower to send him away so I can sleep), and I confessed that in the new house, not only do I want Kavi to have a canopy bed with full curtains hanging down, but I want to make them out of sari fabric, and give her a desi princess room in bright pink and orange.

Kevin points out that she may not like these colors. I rebut that I only have a few short years before she's going to be putting up posters all over her walls (with nails, I'm sure), and that I have to have my fun while I can. He laughs and is inclined to let me decorate, but with one caveat -- that he doesn't want us to impose too much girliness on her. Which I totally understand, and support, but a) she already likes putting on full-skirted dresses, spinning, and telling us what a pretty princess she is, so that ship may have sailed, and b) I think it's possible to have a bright pink and orange room that's accented with some other colors so it's not quite so girly. Maybe.

What do you think? Keeping in mind that I don't want to go super-modern -- it's nice to look at, but not our style. So I probably wouldn't do lime green as an accent. But maybe a pale green? Or even a bright blue or turquoise? Would red tone down the girliness at all? Purple?

And do I have to keep the walls white to make this manageable, or can I get away with a two-tone orange (bright on the bottom, paler tint on the upper walls and ceiling) or some such?

Here are some images that may help you visualize the possibilities...

Please note that this first room isn't really designed for a small child and is something I might want for our own bedroom if Kevin is feeling super-indulgent. :-) Okay, probably we wouldn't actually do this. I include it because it's gorgeous, and a more sophisticated treatment of the color scheme than many of the images that follow:

Note the green and blue accents in the pillow on this bedding -- imagine a fair bit more of those colors through the room. Maybe too modern for my tastes, but I like the color combo: See -- orange wall! Pretty! I also like that this isn't too hit-you-over-the-head modern; the small patterns on the squares have a more traditional feel. And the softer tones are less severely modern than the brights. But the squares keep it from being too traditional, or pretty-pretty: I think this turquoise blue might be the strongest contender right now for a color that would work well with pink-orange. It refreshes the eye: 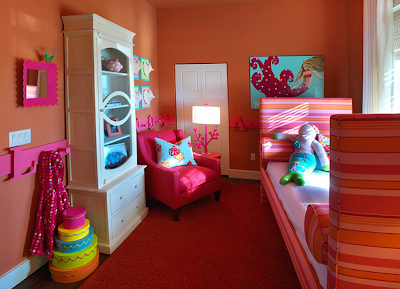 I think this is too pink-orange-white modern for me. Also, I don't like the leaves. Thoughts?

This was apparently a room for two twin girls, adopted from China. Love all the Chinese touches, but I think the yellow walls are a little too yellow for me:

Again, fresh and modern, a bit too much for me. I think part of the issue I have with the modern modern stuff is all the blinding white they use to accent the other colors; I start to find it tiresome: Another one that's a little less modern, more traditional in its muted tones. I like it, but the yellow wall is again not appealing to me.

This is actually a blanket, not a room. :-) But it gives you a feel for desi-ness in these colors.

And this cake is so cheerful, I just had to include it. :-)

I do already have this bedding, which I had been thinking of using for her since it would fit her bed and is cheerfully desi in flavor, but it's in the storage unit right now, so I all I have is this photo to jog my memory of the colors -- white or cream background with maybe red, orange, yellow, green paisley patterns? And the sheets are striped. But it's hard to see much in this image:

4 thoughts on “Kevin and I were talking…”