Skip to content
We've hit a pausing place in the condo process -- waiting for inspection. It'll be Monday at 5 p.m. If all goes well with that, then on Wednesday at 9 a.m., we'll get the Mad Hatter house inspected. Kevin and I are agreed that IF it's in sound shape, AND they give us the price we want, it's just a much better deal than the Beautiful Gunderson, and while we're not going to be major renovators anytime soon, we think we can deal with an exterior paint job and a bathroom remodel this year before the baby comes.

I sort of want to spend all my time looking at furnishings and paint samples and the like, but it also seems sort of foolish when we don't know yet which house we're getting or what our budget will be afterwards. So in fact, I think we're going to take a little break from house stuff for a few days, try to clear our minds.

This afternoon, Kevin and I spent a while watching a video tutorial for Agricola, a game Kevin picked up for us a while back. It looks like it's going to be lots of fun to play -- and apparently it's a good two person (or even one person) game that also expands well up to five, which is great, and hard to find! We were going to play this afternoon, but a realtor neighbor stopped by, and we ended up talking for a while asking her lots of questions, and then Kavi woke up from her nap, so we put off actually playing. But maybe this evening after she goes to sleep, or tomorrow afternoon during her nap!

In the garden, the first of my roses has started opening -- Rainbow Knockout. It's a little pinker than I anticipated -- but that's why I planted ten different roses this summer, so I could see them all in person and start deciding which ones I really really want at my house. :-) I think roses look best when you have at least three bushes clustered together; that also lets you cut a bunch for the house without leaving your poor bush denuded. But doing that does eat up garden space, so you have to choose which roses you include carefully! I like that Rainbow Knockout opens early, and I think it's supposed to bloom a lot and be very hardy, but it may just be pinker than I'm interested in. We'll see.

I'm pretty sure about including Christopher Marlowe (David Austin English), which I just adore. It might be the only repeat in my garden this year from last year, because I couldn't bear to not have it. Other strong contenders from my previous summer gardens include Dark Lady (David Austin English, has a great, strong scent), Granada (grandiflora or hybrid tea), Disneyland (floribunda), Joseph's Coat (climber), and Happy Chappy (shrub rose). One thing is clear already -- I really like color-changing pink-orange-gold roses. :-) 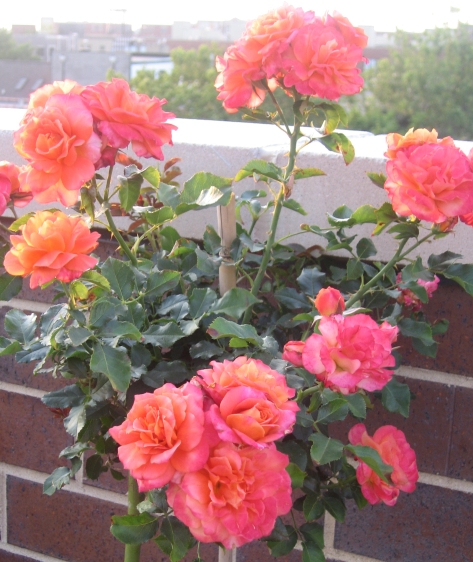