Skip to content
Ooh....weird night. Went to sleep around midnight, I think -- woke up at 4. Staggered around, checked e-mail. Queasy stomach. Ended up lying on the couch with my afghan pulled around me and crashed again there; slept soundly until 8. Very strange. Normally I sleep like a baby...not so much this last week. Excited that Kevin's arriving tomorrow? Stressed about finishing grading and writing two papers from scratch in a week? Over-stimulated on tea or replacement thyroid hormone? Still sick? Just too warm? Hard to tell.

But grading is clicking along smoothly; I think I'll actually be finished by 1 or so. That's good because I have to go into campus and run a whole bunch of errands. Drop off grades, get cash, get stamps, mail packages to Australia and elsewhere, rent a piece of equipment (part of Xmas present, so can't discuss), get envelopes, and I'm sure there are more things that I'm forgetting. I'm forgetting them because my NotePad file got corrupted!! This is very very bad. Not only do I keep my todo list for the next year on this (including deadlines for next semester and next summer), but I also kept copies of all my various passwords, for Cafe Press and PayPal and Amazon and Yahoo and Pair and such. I *think* I know them all, but I'm not positive. Jed suggested some things that might let me retrieve some of the information; I'll probably try those tonight or tomorrow. If I can't retrieve it, I'll have to recreate it. Huge pain.

Anyway, back to my grading. The big problem is not giving them all A's, or at least A-'s. I'm not really supposed to do that, and it's not even so much that they deserve it in terms of their actual writing or writing improvement; it just feels weird giving lower grades in a creative writing class. It's funny, because I would have no compunction about rejecting almost all of their work if I were in editing mode. Somehow that engages a different part of my brain from the teacher part, which wants to encourage them all, every single one...

While I'm grading, *you* can amuse yourself with this week's Strange Horizons. I especially encourage you to check out M'ris's terrific article on a new kind of matter. I had no idea! I mean, I was raised with solids, liquids and gases, and I was sort of vaguely aware of the existence of plasma, though not so clear on what it was...and now there's this other stuff?? Very cool. And her article is comprehensible to someone like me who didn't ever in my life take a physics class, and flunked calculus. (I'm honestly not sure how I managed to not take a physics class...it's not like I meant to. It just sort of worked out that way; a little sad, in retrospect).

As well, we have the first part of a two-part Xmas story by Madeleine (who gave us the silly and charming "War of the Lights" last year, as you may recall). If you, like M'ris, hate serials, at least you only have to wait a week to read the whole thing. *And* she assumes you've read the first part, so there's no duplication of information between the two. (I have to admit, I read the first half and bounced straight to our secret galleys to read the second half. It's good -- trust me. :-) Also a new and lovely poem, and a review of Ken Wharton's Divine Intervention. I haven't read the book, but it sounds good, and I've met Ken at conventions -- he's remarkably nice. I mean, lots of people are nice, right? But when I describe Ken to people, the first thing I say is -- "He's just so nice!" Hopefully soon I'll read his book and get to change it to -- "He's just so nice -- *and* he writes great books!" :-) That would be a better reason to buy his book than just 'cause he's nice. Although his niceness might be enough in itself. If I were his publisher, I'd send him on book tour -- I think even on tv, his niceness would come across and sell lots of books.

And while you're enjoying our fabulous magazine, DONATE DONATE DONATE! :-) Current donations at $115 and climbing... (I hope) 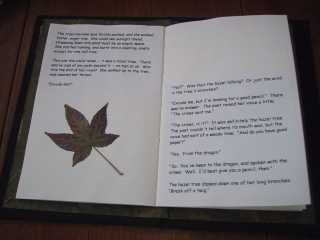 12:15. Almost done. Took a break to do some clean-up art stuff. I finished Lisette's Xmas present, and I'll show it to you, since I don't think she reads this journal very often -- it's a book version of A Poet's Journey (several photos of different pages if you follow this link). I'm reasonably pleased with it, though I did make some measuring errors in the binding process. Hopefully she'll forgive me. I like the overall look of the thing, and it's rather nice to have a version of this story actually in book form. Though it was exceedingly time-consuming, and I'll be very glad when Zak finishes his illustrations so that we can run off a nice little limited-edition version instead. :-) (Not that there's any rush, Zak, since I can't afford to duplicate it anytime soon...)

It's just so pleasant having this stuff as a break from writing. It's pure fun (well, except maybe for cutting book boards and other finicky tasks of that nature), and if I didn't love reading books so, I'd be seriously tempted to take some art classes and really learn something about art. I have a much lower threshold for getting started on an art project than I do for getting started on a story -- I wonder why that is. Maybe because I'm so ignorant about art. :-) There also just isn't that same feeling that I get with stories, that if I do it wrong the first time, I may ruin the story forever. With art pieces, I feel like if I care to expend the energy, I can do them over and over again until I get them right. (Well, the energy and the money for supplies -- it's certainly a lot cheaper being a writer! I've sold a lot of art pieces in the last year, but I'm not sure I've even broken even on supplies yet. Ah well...)

I also re-framed "Beneath the Lemon Tree", and I am so much happier with this version. The rosewood frame that used to be on it was too heavy; it just weighed the whole piece down. This openwork metal frame is a much happier thing for me, and the poem. :-) Don't you agree? 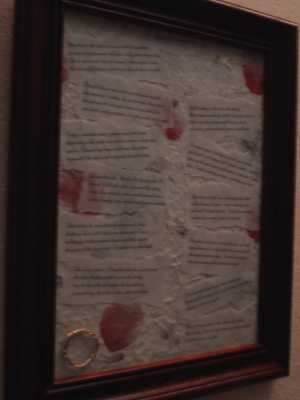 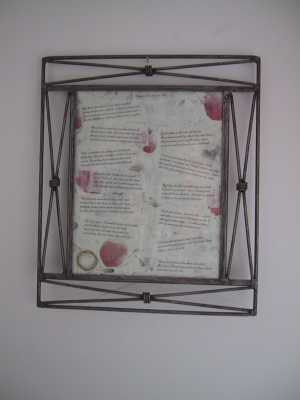