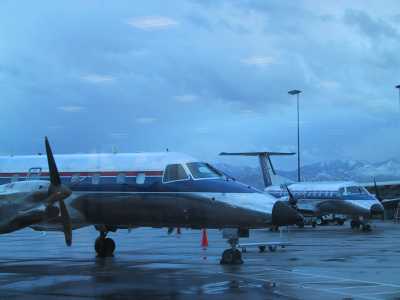 Hey, munchkins. I had a lovely trip; sorry for the quietness while I was away, but I think I needed a little break from it all, y'know?

I got to the airport ridiculously early; no worries, though. Just sat and read a very very fluffy Tanya Huff novel, whose name I can't remember. The fluffiest thing I've ever read by her. Fun, but -- she can do better. Still, it was nice reading; I found a little corner of carpet, right next to the window, shaded by a big plant. People gave me funny looks on occasion, but in a kind of charmed way. I guess when everyone's feeling a little stressed about flying and such, it might be reassuring and amusing to see that geeky girls continue to be geeky girls despite it all.

It pretty much felt like any normal flight except that they checked my ID three times before I got on the plane; they made me take my laptop out of my bag at security; they needed my itinerary at the security checkpoint (I had an electronic ticket -- good thing Kev warned me about that), and there were armed guards in camouflage with big old machine guns on their backs in the hallways. That last one made me feel distinctly less safe. I asked one of them if I could take a picture, but he said no.

I did do some work on the computer while waiting; I put on my headphones, listened to Enya's Watermark, which felt particularly appropriate for such a grey and rainy day, and revised the Strange Horizons internal FAQ. I realized recently that we really did need some sort of internal history and set of answers to questions for our new staff (we hired several recently, including fellow journaller Samantha Ling), so I wasn't just repeating myself all the time (and they weren't just wandering around in a bemused fog). It's pretty much done at this point; I just need to put it on the web so it'll be easier for them to access. Satisfying. Little history of the magazine, etc. We'll be doing a briefer external version too, I think, once this is up. After that, I went back to reading. 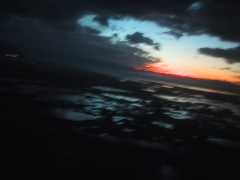 The little lakes are really rather pretty, as you're climbing up into the sky. Sorry the photo's a bit blurry -- not sure if that can be avoided when shooting through a moving airplane window. :-)

Jed met me in San Jose, and we went for Indian food at Pasand, then back to his place. Pleasant evening. Friday, he stayed home and worked there; I can't remember quite what I did -- possibly caught up on backlogged e-mail. Read some comic books, goofed off. I needed to. That evening, we drove up to the South Bay and met an old friend of his, Jessica. I have to admit, I was a little nervous -- usually, I'm pretty good with meeting new people, but Jed had had a certain fondness for this one, back in his college days, and....I dunno. I guess I just wanted her to like me. :-) We had Ethiopian food at Cafe Colucci -- yum yum. Their doro tibs were particularly good. Some tasty tej (they make it themselves, and it's nicely spiced) and good conversation. I liked her, and I think she liked me. She reminds me a little of another of Jed's friends, but Jed can't see the resemblance, so perhaps it's just me.

They dropped me at David's, and I think I pretty much collapsed. Tired munchkin. Saturday, I went up to Berkeley. I was supposed to meet Karen at Au Coquelet, but we crossed wires somehow and didn't meet up. Still, I had a nice time there, drinking their (good) chai, and reading essays from The Business of Memory, a very interesting book, and one I recommend to anyone interested in writing nonfiction, especially memoir. Then a stop by Other Change of Hobbit, where I picked up the next Michelle West massive tome, and the sequel to Diana Wynne Jones's Dark Lord of Derkholm, which is just a silly book. Also picked up LeGuin's The Telling, not realizing until I got to Cafe Elodie and settled down to read it that this was the one I'd just read. Sigh. I had gotten it confused with Tales of Earthsea somehow. I read the Michelle West instead, for many hours, with a grilled panini sandwich, and then later with chocolate cake. I did stop to write several pages of a nonfiction piece I'm handing in to class today, "History Lesson", a combination of memory and ethnographic history, which drew heavily on the research I did last spring.

Around four, back to Au Coquelet, stopping to pick up flowers for M'ris, who was having a celebration of sending out a novel, Reprogramming. I want to finish a novel, dangit. She's written three! I also passed along The Telling -- I decided it was a fortuitous error on my part. :-) Dinner with the gang, back to David's where he watched baseball and I read more West. Mmm...

Finished the West in the morning, wrote a few more pages. Tea with Tim and Heather, then Karen stopped by very briefly to give me my Christmas/birthday/etc. present. I was blown away -- look what she made me: 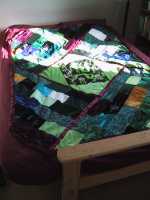 A quilt. A fabulous, jewel-toned quilt with velvets and silks and dragons. It is so very very lovely. I am astonished.

Dwell on the quilt a moment, please. Then continue.

David dropped me down at Jed's; we hung out, ate leftover Ethiopian (yum), watched a Whoopi Goldberg comedy, talked. So nice. In the morning, he took me to the airport, and I diligently wrote several more pages over chai before getting in the very long security checkpoint line. Then I read the Jones book all the way home -- delightful.

I feel better -- smiling and rested and happy. It was nice to go away, and nice to be back too. :-) 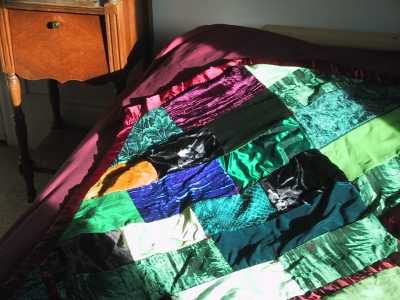 4:40. Home again home again -- but not for long. I have class in an hour, and a bit of writing to do before it (a crit to write up), so this is just checking in to say hi. M'ris tells me that she can't see the lakes above. Very odd. I see them. Can y'all see them? There should be four photos on this page -- planes, lake, and two photos of the quilt.

David tells me that the guns were probably submachine guns or automatic rifles. I dunno -- they were big and scary and in the hands of kids at least a decade younger than me, as far as I can tell. Sigh. I don't know that I'd trust myself with a gun that big, much less somebody else...

I really stopped by to give y'all a list -- we've finally made the final decisions on the new book -- which also has a new title, Wet: More Aqua Erotica. I hope to get more excited by the title by next summer when I'll be doing promotions. I *am* excited by many of the stories in the book (not quite all, but that's to be expected when four editors are involved, eh?). Here's the final line-up, in no particular order:

If by some chance you've submitted a piece to the anthology and have not yet received a response from me, please drop me a line.