Skip to content
It got a little nuts, trying to get things done before Spring Break started. But things have calmed down now. Paul and Marcia came over yesterday; we had curry and played cards. Fun. :-) And I've when I'm not embroiled in long copyright conversations at Speculations, I've been really enjoying messing around with collages. I had fun with the stained glass bottles, but I don't think they're skilled enough for me to do anything with that -- they feel like craft to me, not art. And not very good crafting at that. But the collages...I dunno, but with some practice, I think they might even get good enough that I could sell them. What do you think? Would my readers be interested? Should I try them at convention art shows? (Is there a charge for hanging your art there? I'm so ignorant...) Or will I just embarrass myself if I try? I can always stick to foisting them off on friends as 'birthday gifts'. :-)

Here's the first one I tried: 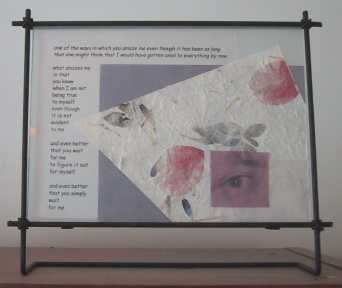 It doesn't feel finished yet -- I want to keep it fairly simple, but there's still this big open space in the middle of it that I think needs something -- but I don't know what. I guess I'll just keep pondering until I figure it out. 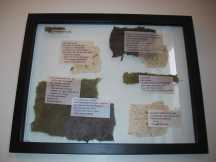 I'm happier with the second one. It's layered on two sheets of glass, and I'm doing different things with the sheets. The first thing I did was choose the poetry, and then layer that with torn paper on the top sheet. 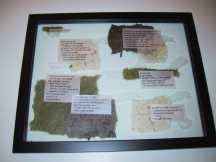 Then I took the bottom sheet, and etched waves on it -- I wanted to give a feeling of movement to the piece. 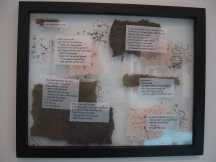 Then I added some dried thyme to that layer, and slid it back under the top sheet, so the fragile thyme would be protected (though I wouldn't recommend heavy jostling still).

I'm reasonably happy with how it looks so far, but it's not done yet. I'm pressing some white rose petals, and some rosemary, and some sage. They all feel appropriate (along with the thyme) for the themes in this poem. It'll be a few weeks until they're ready to add, so I'll just have to be patient for now. I'm looking forward to the finished effect, though. 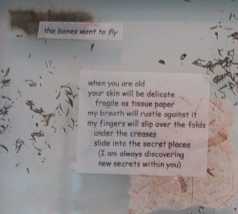 I got up this morning, puttered about, eventually went to mall for some killer end-of-season sales (I get great pleasure out of buying a $70 sweater for $10 -- and doing it five times in a row is an actual thrill -- and being efficient enough to find the clothes, try them on, buy them and walk out again in half an hour actually gives me the shivers). Then I met Paul and Marcia and we saw Crouching Dragon, Hidden Tiger, which I loved (and I was very glad that I avoided reading all commentary on it beforehand, so that I really had no idea what to expect). I picked up some craft supplies afterwards, and then came home, around 4:30. That was when I started to get mopey.

I called Kevin; he wasn't home. Jed wasn't home. David wasn't home. Lisette wasn't home. Kirsten wasn't home. And the terrible thing about this kind of phone call sequence is that with each successive call, you have it made clearer and clearer to you that everyone else is having a good time, and that you're just a big goober to be sitting at home alone, with a book that's depressing you, nothing decent on tv, and absolutely no inclination to do real work.

I was just about to start playing a computer game out of sheer desperation -- I didn't actually want to play, but I know from experience that the games distract my brain enough that hours can go by without my noticing; I would have been depressed when I stopped playing again (more so, for wasting all that time), but I wouldn't have had to endure the interim hours until bedtime. Then David called me back.

We talked a little, and I moped at him, and he made vaguely sympathetic noises. And it became clear over the course of the conversation that what I really wanted was to be around people I knew well, who loved me, and whom I could cuddle with. Kevin has mathematician guests this weekend and next, so they weren't good for him (or for me, since if I went out, he'd still be busy doing math with people the whole weekend). David pointed out that if I had a car, I could get in it and start driving and be in California in 12 hours. I said that I *could* take a train. We talked about this for a while (it's Spring Break, so I don't need to be here again until the 20th), and then I climbed out of bed and checked the train schedules. Reasonable fares, but trains sold out 'til Monday. Still possible, but given the 16 hours of train travel in each direction, seemed less sensible. And then I thought, what the heck -- might as well check the plane fares. Good for a laugh, anyway.

And it turns out that Delta has decent fares. Even though it's last minute. I could leave in eight hours if I wanted to (I don't want to leave quite that soon). And so now I'm thinking about going to California tomorrow.

I might not go. I need to think about it some more, and talk to Jed (who's at a concert right now), and then I'd need to convince myself that it's not totally nuts to decide tonight to leave tomorrow. I'm not good at this sort of thing. Kevin was always very willing to pick up and fly out on a moment's notice (or more accurately, pay for me doing it, 'cause he hates the inconvenience of flying and I don't mind it nearly as much (I even enjoy it sometimes)). I'm not quite that spontaneous. I *like* planning things.

I don't hate Utah. But I definitely don't love it either. Not in any way, shape or form. It's good for me to remember that I don't have to stay here if I don't want to.